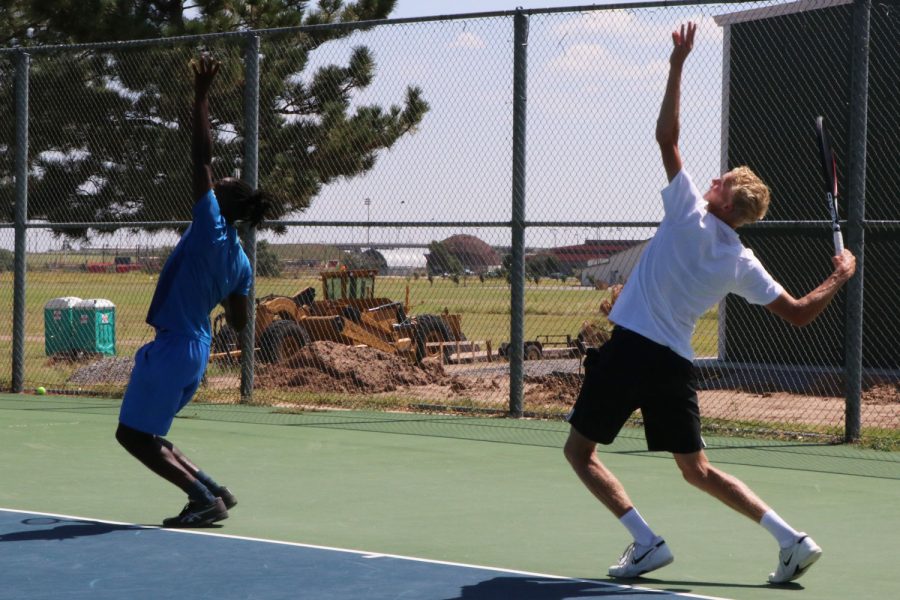 The men's tennis team practices serves. They've had a long break between their last match against Barton Community College on April 17 and heading to nationals this weekend. The monthlong break helped to heal injuries and get fresh legs.

The Saints tennis team will head to the NJCAA National Tournament in Plano, Texas this weekend. The tournament will begin May 17 and finish on May 21. It will pit more than 30 of the top teams around the nation against each other.

Seward County Community College will head into the tournament ranked as the fourth best team according to the latest Oracle/ITA national rankings. The Saints men’s tennis team ended the 2021 regular season with a 12-3 record. They will take six singles players and three teams for doubles to the tournament.

Here’s how the teams make points. Each individual will compete for points that will get added to their team’s total. A first-round victory is worth two points for their team and every win after that will be one point additionally for the team’s overall total. If an individual loses their first-round game they will be placed into the consolation bracket and every win in that bracket will be only .5 points for their team. If the individual wins the first but loses in the next round they will, unfortunately, be eliminated from the tournament.

The Saints have four of their six singles players ranked in the top 30 in the nation. Luciano Fisicaro received the national ranking of fourth and has a season record of 10-3 in match play as Seward County’s top singles spot. Kyllian Savary was named No. 14. He has played number one or number two singles and has a 9-2 match record. Raul Centeno comes in at No. 16 with a match record of 6-2 and has played at three singles all season. Juan Gonzales rounds out the top players for the Saints with a No. 27 rankings and a 10-2 match record.

For doubles, the Saints only have their top two teams receiving national rankings. Luciano Fisicaro and Raul Centeno have been awarded the No. 6 spot  with a 7-1 match record. Kyllian Savary and Enzo Frequelin have been the second doubles for the Saints towards the end of the year and with a 3-4 match record and ranked at No. 13.

To keep up with the Saints at the national tournament, go to Seward Saints twitter.