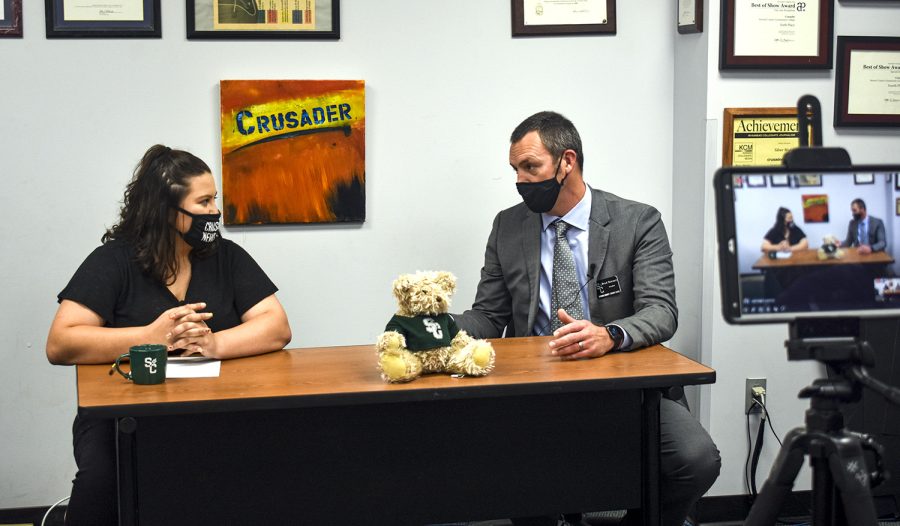 Brad Bennett went live with Crusader’s Mary Ramirez on Instagram and Facebook on Thursday, Oct. 22, 2020 soon after arriving on campus. Bennett's new return date is Feb. 14, 2022 to the SCCC campus.

Brad Bennett is set to return to Seward County Community College as president. This news comes just days after Greg Gunderson resigned. Bennett will begin his duties on Feb. 14.

The SCCC board of trustees came to this decision Thursday night at a special board meeting to discuss the college’s future. The motion to negotiate and offer the position to Bennett was passed unanimously.

Previously, Bennett was president for six months during the 2020-2021 school year. He left to pursue an unsolicited job offer at a private company in Colby. Ron Oliver, chairman of the board of trustees, said that the board had “absolutely” no reservations over the decision to rehire Bennett.

Board member Kay Burtzloff shared her sentiments on Bennett’s rehire.

“We were fortunate that Bennett is going to be able to join us so quickly. He is a leader that already knows our campus and we bypass the learning curve that a new candidate would need,” Burtzloff said. “The campus was genuinely sorry to see him go and our feedback is that our campus and community are thrilled to have him back.”

The news has caused mixed reaction throughout the SCCC hallways. Larissa Amador, a sophomore accounting major, has her reservations about Bennett’s return.

“Honestly, I don’t think he was that bad of a president – it’s kind of a mixed feeling in a way. I talked to him a couple of times and he seemed like a good person,” Amador said, then added. “After not being here for some time, but wanting to come back or offer to come back — it doesn’t look too good on his side, indecisive in a way.”

Hiran Gunasekara, economics instructor, expressed similar thoughts as Amador. Gunasekara asked that although Bennet is a “nice gentleman, [why are we] asking people who have already left here to come back?” The instructor said he didn’t know Bennet personally and was thinking through this as an economist.

“My personal opinion is asking people who have already left here to come back doesn’t make sense to me – I’m going to be frank with you,” Gunasekara said. “He left us for a reason and not so long ago. It has not been years – as a result of this, I don’t think it would be a wise idea. Look out again and try to at least get someone.

“Our [SCCC’s] hiring practices need to be a little different…I know it is a difficult task, but at the same time we have to think of the institution and not do the easy thing,” Gunasekara said. “I know hiring is a costly thing because the process takes money and time and in the last year and a half we have gone through two. On the other side, I know he is from Kansas and getting someone from Kansas means they are more likely to stay.”

Others were excited to hear the news Friday morning. Some even “whooped” in the hallways. Irene Blackwelder, a bookkeeping and cashier specialist, believed that it is a great thing that the board chose to do this.

“When he was here before, I could see that he had a passion for the college and for higher education. I think he has a lot of room to grow and he will grow with us,” said Blackwelder.

Although Gunderson is leaving he believes it is a “fantastic” idea to bring Bennett back. He said the return of Bennett is a “tremendous relief” to him, given that his family emergency forced him to only give four days notice on his resignation. The idea of bringing back a former president with that much experience, Gunderson added, will help Bennett hit the ground running.

Bennett will start on Monday and working remotely from Colby. He plans to physically be on campus later next week and will make the transition back to Liberal with his family in the coming months.