Equality in the classroom

How accessible campus is through students’ eyes 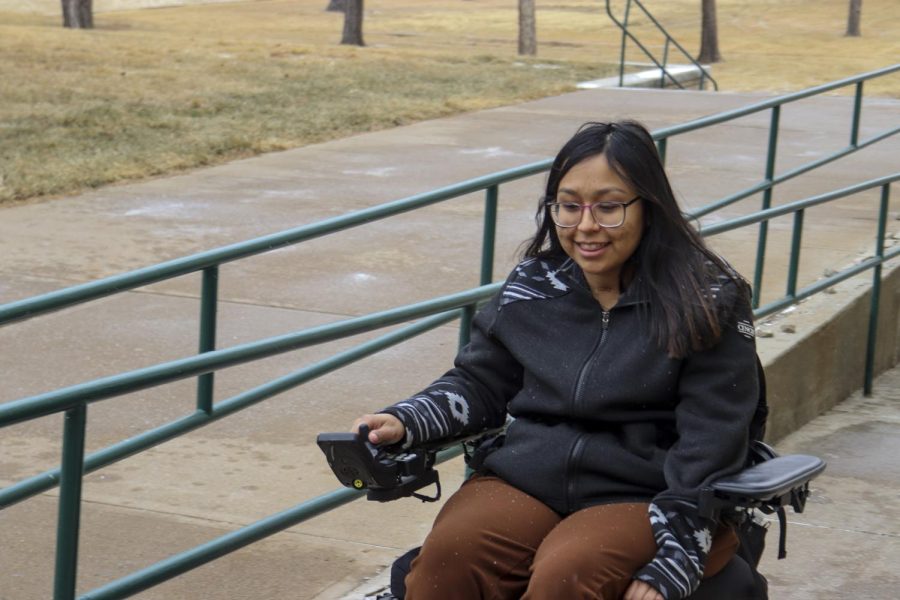 Navigating to a class on a cold, snowy day is a challenge Portillo faces daily. Since some classrooms are in different buildings, she has to drive across campus outside.

Weaving through chairs and desks while trying to find a spot in the classroom can be difficult in a wheelchair. Natalie Portillo, an elementary education major from Plains, would rather stick to the sidelines of the classroom instead of banging into desks that are too close together.

Being in a wheelchair comes with its challenges. Portillo encounters many while attending Seward County Community College. One daily issue for her is classrooms being in different buildings with less than 10 minutes between classes.

“I have to go outside to go to classes… so it’s harder for me, especially in the cold weather,”

Portillo says, noting that going from building to building can sometimes cause her to be late to class.

For something to be accessible, it must have the qualities of being easy to navigate or obtain. This concept was first introduced in 1968 when the Architectural Barriers Act was passed, creating accessibility requirements for all federal government-owned buildings like SCCC’s campus. Then in 1990, the Americans with Disabilities Act provided protections for the disabled against discrimination.

Accessibility goes beyond the legal requirements and into the idea of equity among students. The need for equal access to education is under the premise that if one student has an opportunity to achieve success, the next student should as well.

Imagine going on a school-sponsored trip and not being able to get on the bus while everyone else just climbs in. That’s exactly what happened for Portillo on a TRIO trip to Kansas City. Since SCCC didn’t have a wheelchair-accessible bus, she had to be carried onto the van.

Portillo says one thing she’d add to make SCCC more accessible is a bus with a ramp.

For Roque Reveles Montelongo, a mass communications major from Plains, the most significant challenge he faces at SCCC is wearing masks. It causes muffled sounds so he had to move up close to the instructor to hear better.

“I wish everything would be normal. No more COVID. Things would be easier without masks,” Reveles says. “Sometimes it’s hard to wear a mask because I want to read people’s lips.”

SCCC provides accommodations for a few of these difficulties. In Reveles’s case, some instructors now wear microphones that can attach to his hearing aids. Instructors also allow students to use tablets for captions.

To accommodate Portillo, tables in classrooms were raised to fit her wheelchair under. The beds in the dorm have also been lowered. She has her own room and bathroom in the dorms which are both very spacious.

“A lot of people help here, especially with me,” Portillo acknowledges.

Annette Hackbarth-Onson, dean of student success and enrollment, is a major force in helping students like Portillo and Reveles in their transition to college.

“Annette usually helps us with all that [accommodations]. Like making sure I’m able to get to class or the desk is high enough,” Portillo says.

Hackbarth-Onson is the coordinator between students and instructors for coming up with an individualized plan of action to meet the needs of each student. Regardless if it is a physical or learning disability — as learning disabilities also fall under the Americans with Disabilities Act, her goal for each student is to help “set goals for themselves and achieve those goals” by advising, planning transfers and disability services.

Even though this is not a difficult job for Hackbarth-Onson, she finds the stigma and fear students have to seek help can force difficult moments.

“I think sometimes students are afraid to let people know that they may learn differently or may need support that other people don’t have,” she says. “It’s that reluctance to let us know that prevents us from being able to help effectively.”

The individualized support plans are created to “make things equitable across the board.” This is, for Hackbarth-Onson, an ongoing challenge. To her, the stigma attached to receiving support services stops many people from reaching out for help. At the moment, Hackbarth-Onson believes this, along with other added pressure of being a first-time college student, has led to less than 3% of SCCC’s current enrollment having accommodations due to a physical or learning disability.

Crusader tried to find a student to comment on this issue but no one was willing to go on record, even as an anonymous source, due to the stigma of having academic accommodations and Seward being such a small college.

Beyond just an academic plan of action, there is a need for the campus to provide equal access physically for every student. This is what Dennis Sander does for SCCC as vice president of finance and operations. He is in charge of the logistics for advancing the campus to be more accessible for everyone. Sanders believes that the campus is always being “retrofitted” for students’ needs and for an issue to be addressed — it first needs to be discussed.

“ … I will openly say that I wouldn’t shut a door on any student. I will listen, try to accommodate and try to come up with a mutually agreeable solution,” Sanders says.

He believes that Seward is a “very open-door college.” If a student needs help filling out SCCC’s Student Accessibility Services Request Form, Sanders or the vice president of student services and the dean are all willing to listen.