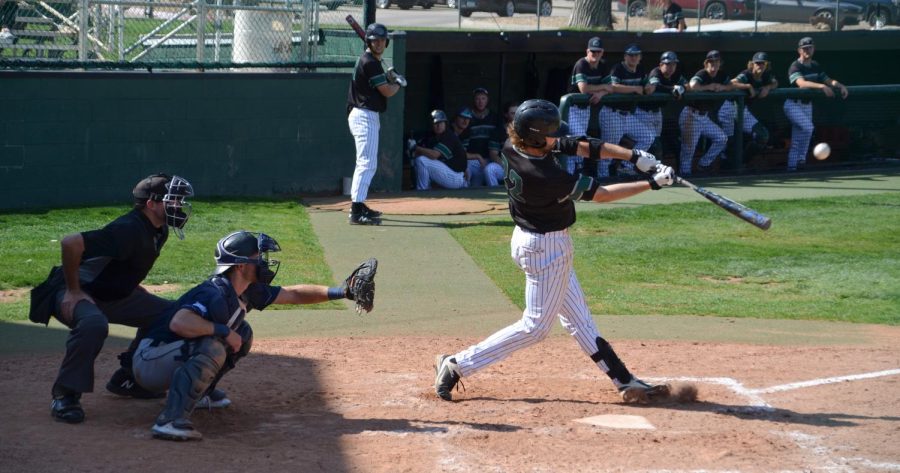 Hitting the ball is Jaxson Gregg, a freshman from Keller, Texas. In the second game Gregg hit a double which brought Ranse Radtke and Jace Schneider home scoring two points.

“I think the first game went well for us because we played the best pitcher in the conference and we still put good swings on him,” Jase Schneider, infielder, said.

In the top of the first Mason Martinez, pitcher, strikes out his first leading to the bottom of the first.

Ranse Radtke, outfielder, starts the bottom of the first by hitting a single on a ground ball to center field.

With a sacrifice fly by Radtke, it brought home Javier Gomez, catcher, for their first run in the bottom of the third.

“I would say Mason and Ranse lead the team for the first game because Mason pitched well and Ranse hit well,” Josh Eberhard, pitcher, said.

Dylan Day, pitcher, could not agree more with Eberhard about Ranse hitting great in the first game, which really got them going.

With three scores by Colby in the top of the fifth, it led them to a victory over the Saints 1-4.

“We knew we were facing a good pitcher in our first game, but I think timely hitting was one of the bigger things we could have fixed,” Schneider said.

Day begins the first game with two strikeouts looking, leading them to the bottom of the first.

In the bottom of the third, Schneider singled a ground ball to third bringing home Radtke for their first score of the game.

In the top of the fourth the Trojans scored three runs, however, the Saints matched it, scoring three in the bottom of the fourth.

Jacob Masters, outfielder, doubles on a fly ball, later leading him to score by a ground ball single from Jordan Crowder, catcher.

Reed Thomas, infielder, and Connor Cox, outfielder, both moved up due to a balk by the pitcher from Colby.

In the bottom of the sixth Jaxson Gregg, corner infielder, doubles on a line drive to center field to bring Radtke and Schneider home.

“I would say in the second game we hit well, I mean we put up seven runs and had over ten hits from swinging the bat well, ” Schneider said.

While the Saints kept up very well, the Trojans scored, getting many hits and home runs, giving them a higher lead over the Saints. By the bottom of the eighth Saints fell 7-18.

“The hitters just got a good hold of the balls by the end of it and we let the game get out of hand,” Schneider said.