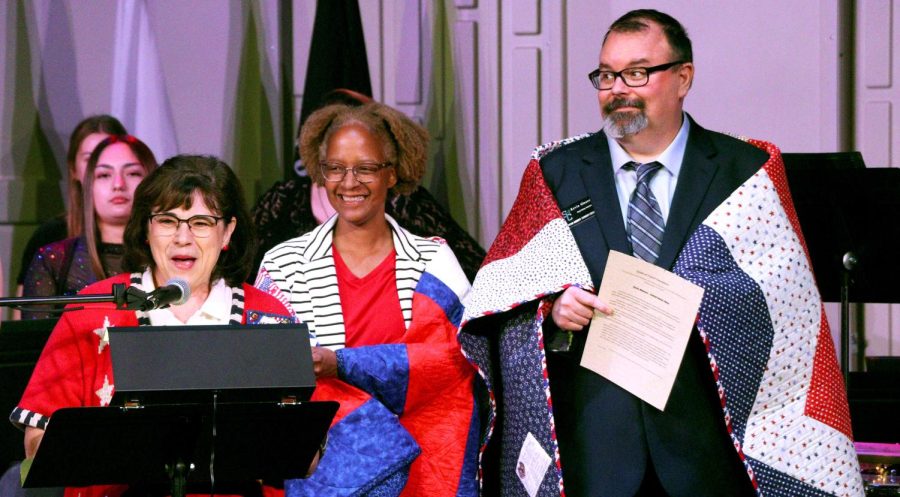 History teacher Kevin Gleason and his wife Anita Gleason both received uniquely-made hand-stitched quilts from the Quilts of Valor Foundation. These quilts were awarded to the couple to demonstrate gratitude for their service done in the Navy.

With the arrival of spring, the flowers have begun to bloom and the songbirds’ voices have started to travel through the morning air. The same voices echoed throughout the Showcase theater Friday. The Seward County Community College’s Spring Concert showcased the band and choir.

In “Jabberwocky,” Tirzah Howery, a liberal arts major, had the opportunity to hold up a sword known as the vorpal sword.

“It was my favorite part. I made the scabbard for it over the course of a few weeks. It’s the best part of the concert,” Howery said.

The concert band opened with “Let Freedom Ring” by James D. Ployhar and ended with “The Light Eternal” by James Swearingen. Throughout the concert, there were narrations provided by several US Armed Forces veterans.

Kevin Gleason narrated about former president John F. Kennedy in the song appropriately titled “J.F.K: In Memoriam.” Many students already knew Gleason as the history instructor at SCCC. However, not many knew that Gleason served in the United States Navy.

Not all songs were easy to perform, the song “J.F.K. In Memoriam” was quite memorable for one of the band students, Alexis Soto, a business management major from Liberal.

“Probably the most difficult song was ‘J.F.K: In Memoriam’ because the first time we heard it was actually on a recording, and we were following through with the sheet music — it was so long,” Soto said. “I was like ‘We are never going to get through this.’ The only problem I had with it was my lips got really tired from it. That was basically what made it hard for me.”

The second to last song was titled “Each Time You Tell Their Story” and it was narrated by James Langley. He is the father of one of the flute players, Audra Langley, an American Sign Language major from Rolla. Audra Langley was shocked to hear that her father was going to be a part of the concert and did not know he would be with the band until three weeks before.

“It was nice for him to be a part of something I’m involved in because he knows nothing about music and it was like his world came into mine,” Langley said.

“It was a lot of fun [to be in both choir and band]. I have been in both for a very long time. I feel like I am very good at it and I enjoyed it a lot,” Howery said.

Howery has been singing throughout her life and she has been in choir since junior high. She has also been doing band since the fifth grade.

The concert band was opened to not only students of SCCC but also community members. Sherry Moentmann, an English instructor at SCCC, played the french horn.

Near the end of the band concert, an organization known as the Quilts of Valor came on stage to present Kevin and Anita Gleason with a quilt for their 10 years of service to the U. S.