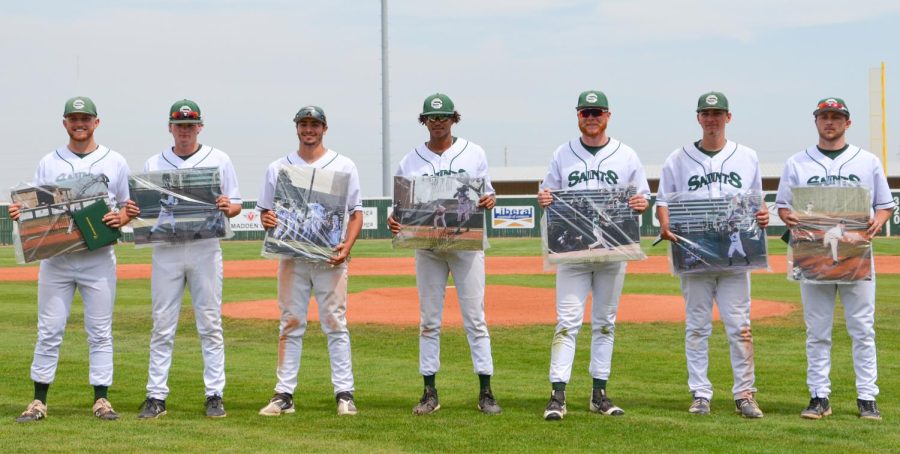 The sophomores were recognized on the field instead of walking across the stage during their doubleheader. They received their diplomas and a picture of themselves playing during their career at Seward. [Pictured left to right are Dylan Day, Reed Thomas, Jase Schneider, Mason Martinez, Gannon Hardin, Brody Boisvert, and Zach Walker]

May 7 was not only a celebration for 2022 graduates but also for former Head Baseball Coach and Athletic Director, Galen McSpadden. This jersey retirement came after McSpadden’s 36 years of dedication to Saints’ Athletics and Seward County Community College. The ceremony took place at Brent Gould field before the Saint’s Baseball game.

The opportunity to retire McSpadden’s jersey was something Mike Davidson, McSpadden’s assistant coach for 18 years and baseball’s current head coach, supported. Davidson described the former coach as “tough”, “honest” and a “tireless worker.”

“… above all, he cared. He cared about his players, even though he was tough on them, he pushed them to their limits. He still cared about them as a person, you put all of those together it really helps you retain players and have success,” Davidson said.

Due to the doubleheader, the Saints’ sophomore players were kept from walking the stage and receiving their diplomas. Instead, they were recognized after their first game against Pratt. During the recognition, they received a picture of themselves playing and their diplomas on the field.