Lady Saints keep winning, not slowing down as playoffs near 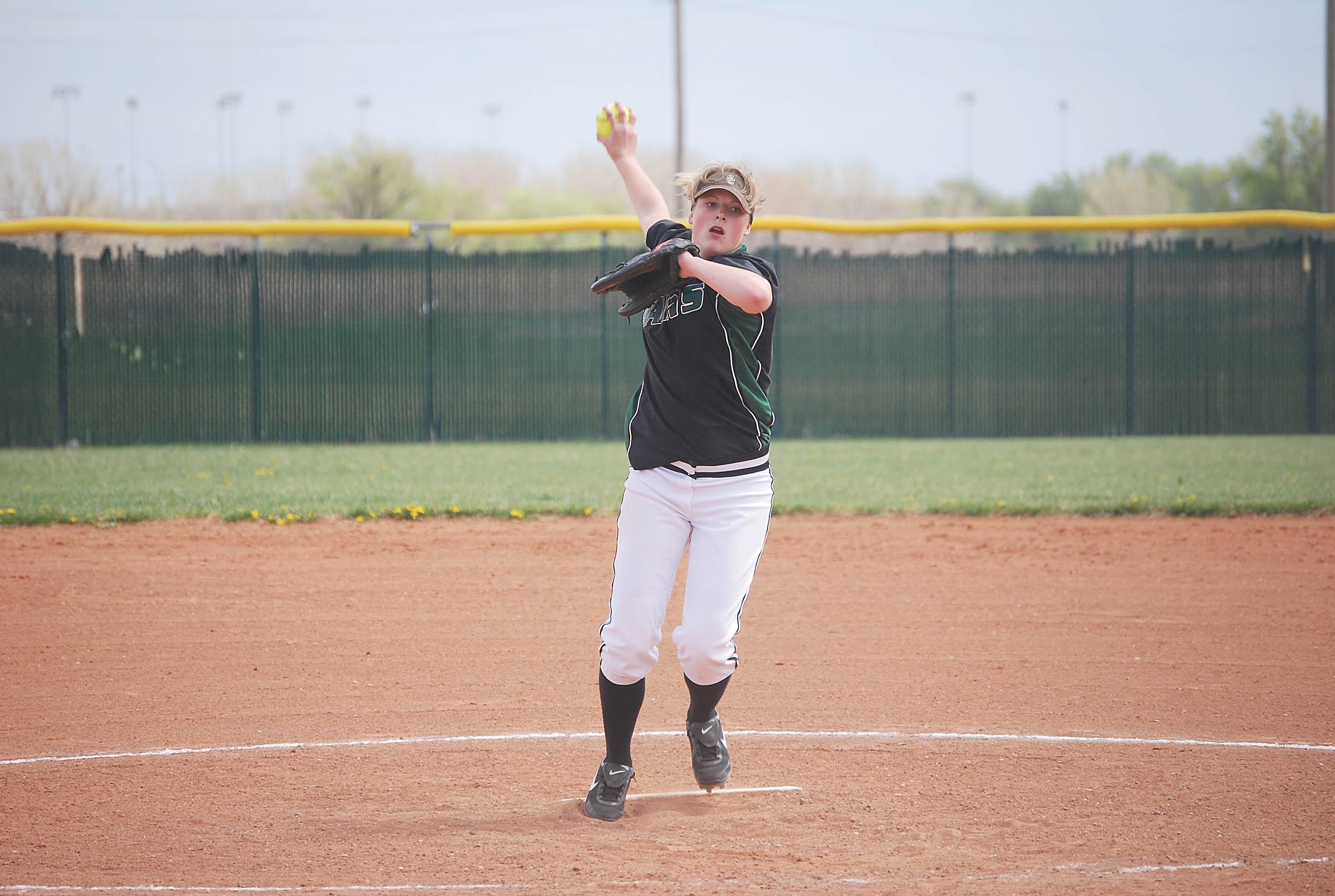 Pitcher Erin Roufosse winds up to throw a pitch against a Barton County hitter in game one on Wednesday. Roufosse threw a complete game shutout and only gave up one hit in the contest.

The Seward County Lady Saints softball team continues to prove that they are a top team in the nation as they rolled through Barton, 4-0 and 3-0 on Wednesday at Lady Saints Field. Erin Roufosse took the circle for the Saints in the first game of the doubleheader and was lights out from the first pitch. Roufosse took a no-hitter into the seventh inning when Kayla Becker laced a single to left field to break up the no-no. Roufosse used a combination of strikeouts and ground balls to baffle the Barton County hitters as she had seven strikeouts and 12 ground ball outs. The Lady Saints found themselves in a tie ball game until the fourth inning when Brianna Baron knocked a double to left field and two batters later, Kelsea Blackstock hit a single up the middle to plate Baron. The Lady Saints were held scoreless in the bottom of the fifth, but found insurance runs in the sixth when they added another three runs to the board. Marisa Coats started off the inning by hitting a single back up the middle. Baron walked after working a full count. That is when Brittany Kent stepped to the plate. Kent grounded out in her two previous at bats, but was wasting no time in her third at-bat as she crushed the first pitch over the left fielders head for a two-run triple. Kent would later score on a fielders choice to the second baseman. Game two saw Sydney Cicchetti step into the pitching circle proving to be nearly as un-hittable as Roufosse by tossing a complete game shutout allowing only four hits, all singles, and had five strikeouts with one walk. The Lady Saints threatened early in the second inning as Baron walked to start the inning, stole a base and advanced on a passed-ball. Kent flew-out to left field and Blackstock struckout following Baron leaving her on third base with two outs. Amy Schartz walked and Lynda Musick grounded into a fielder’s choice to end the inning without scoring Baron. The third inning started with two quick outs for the Lady Saints, then Shelby Casey stepped to the plate. Casey worked a full count and fouled off two pitches before she ripped a double to left field. Coats followed suit by hitting a single up the middle into center field that allowed Casey to score and gave the Lady Saints a 1-0 lead. The Lady Saints were held scoreless in the fourth but were able to plate two in the fifth when Leah Sitter started off the inning with a single and then stole second. Alicia Reyes singled to center field to advance Sitter to third base. Reyes was able to advance to second on a past-ball and set the stage for Casey as she ripped a single up the middle scoring both Sitter and Reyes to give the Lady Saints a 3-0 lead. The next three batters were retired in order to kill the rally by Seward. Cicchetti closed out the game in the seventh by giving up a single, then getting a ground ball out and struck out the final two hitters of the game to seal the victory. The Lady Saints will travel to Butler Community College for a tournament this weekend. The Lady Saints go into this weekend with an overall record of 36-7, 8-2 in conference. The Lady Saints hold the top spot in the Jayhawk West and are currently ranked as the No. 10 team in the nation. After this weekend the Lady Saints will have five regular season games remaining with three of them to be played at home before Region VI play on May 7-8 in Wichita. The Lady Saints will be riding their two strong arms, Roufosse and Cicchetti, as the Canadian duo continues to impress after combining to throw 15 shutouts on the season and 34 complete games. The two have a combined ERA of 0.97 and have struckout 220 hitters this year. Roufosse has also been named the KJCCC Pitcher of the Week three out of the last four weeks and a Lady Saints player has been named as Player of the Week in four straight weeks as Baron took the honors last week. The Lady Saints next home game will be on April 21 against Colby Community College with a start time of 3 p.m.