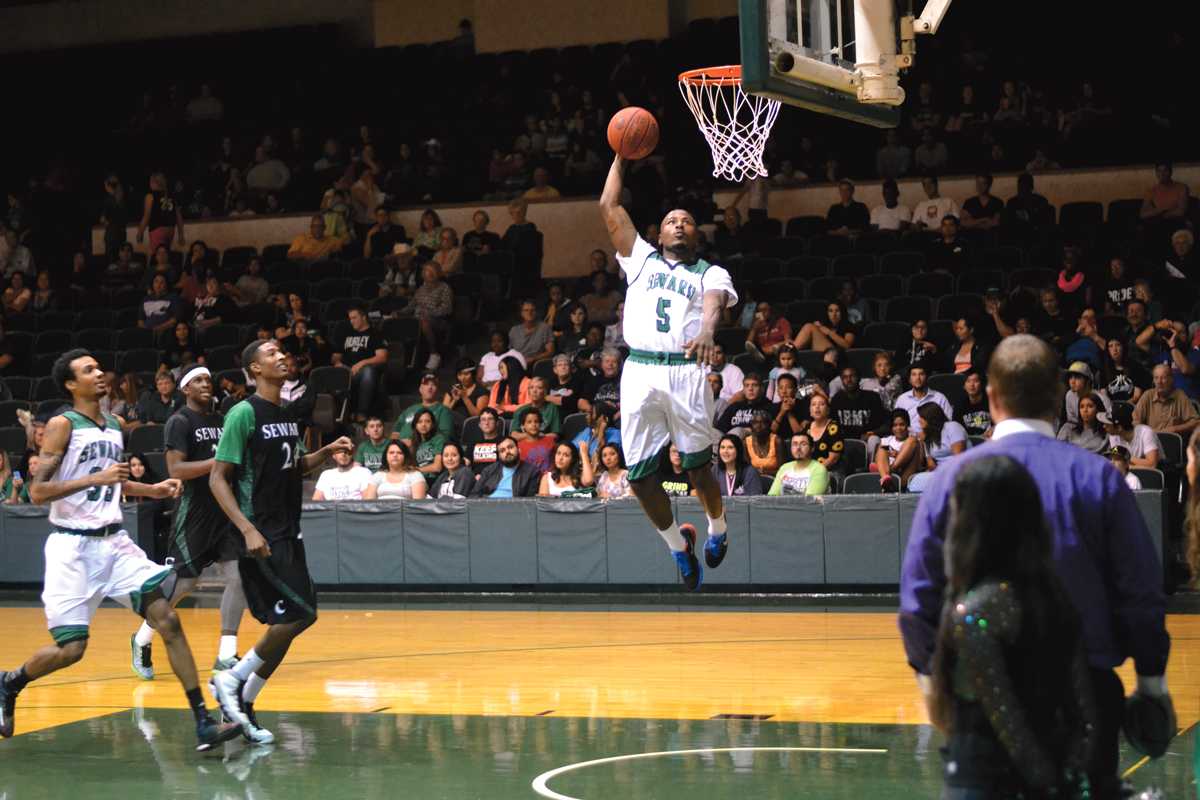 Crusader photo/ Grant Glaze Evan Allen dunks during the Saints scrimmage that wrapped up this year’s Basketball Preview Night. Allen and the Saints will tip off against Northern Oklahoma College-Enid on Friday, Oct. 31 at 8 p.m. in the Green House.

Seward fans got their first look of the Lady Saints and the Saints basketball teams at the annual basketball preview night. The cheerleading squad and the dancing team also made their debuts to the Seward fans. The night’s activities began with basketball musical chairs with participation from the audience. Then, coaches Bryan Zollinger and Patrick Nee went against coaches Toby Wynn and Kelli Willingham for the free throw contest. Fans then were able to see the players’ ability to shoot in the three-point context. Four Saints competed against four Lady Saints, with the Lady Saints edging out in the win. The uniform relay was next, where children from the audience had to get dressed in the Saints uniform and run to the edge of the court to make a basket. The next competition was one of the most anticipated, with four Saints going against each other in the dunk contest. Freshman Nick Singleton won the dunk competition. The cheer and dance squad followed next and performed before the last event of the night. The Lady Saints were up first for the scrimmage, with the Saints closing the night with theirs. Kevin Sims, a guard on the Saints team, said, “[Fans can expect] excitement. We are ready to play. We have been waiting for this all season to get a chance to play with everybody. Everybody became our brothers and now we just want a chance to get out there and show everybody what we are made of.” “[Fans] can see a lot of great things,” said Leslie Speer, a forward on the Lady Saints team. “We [have] a lot of good players and I think we will have a great season.” The Lady Saints will play Friday against Hill College at 6 p.m. in the Green House. The Saints will follow at 8 p.m. against Northern Oklahoma College-Enid.