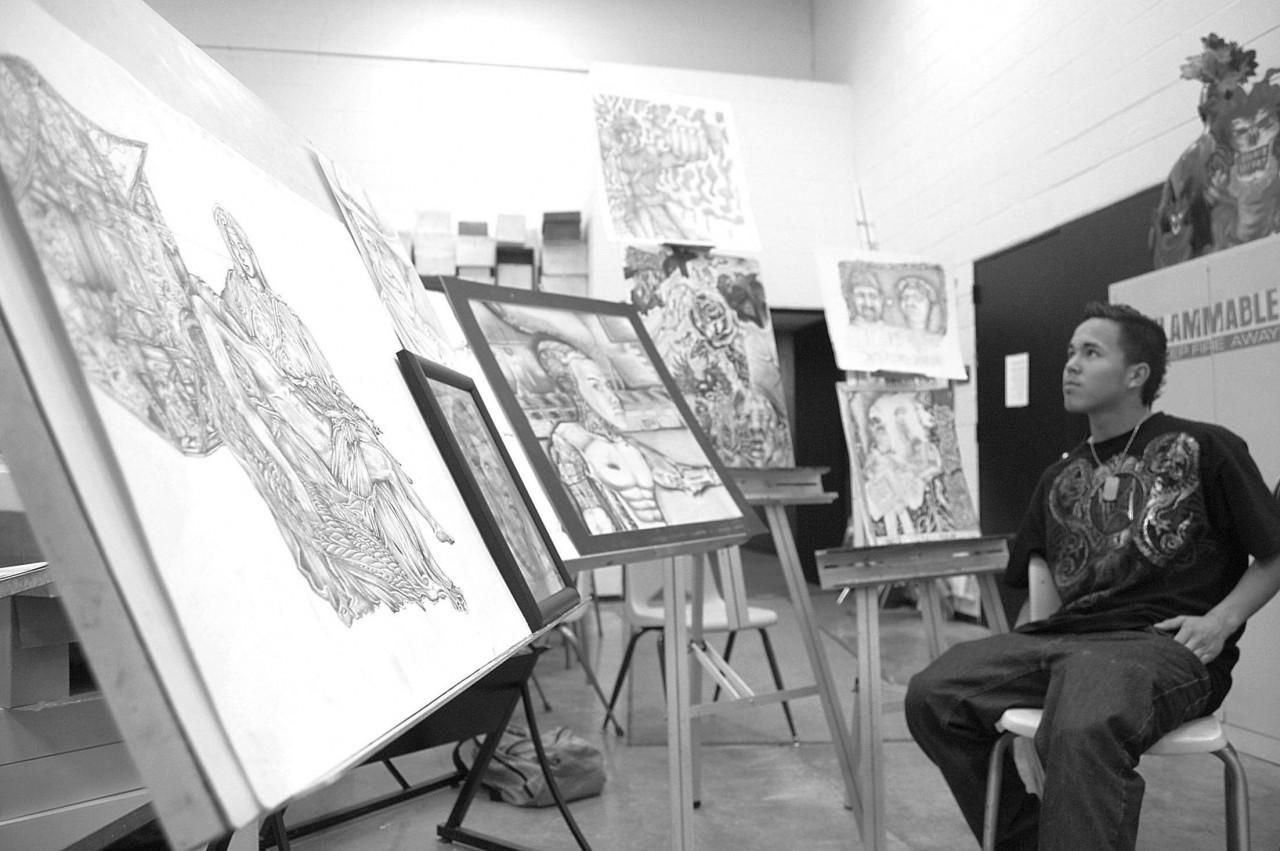 As Omar Rios explains his idea for his latest drawing of having a satisfied Michelangelo peering over several of his classic works of art, one couldn’t help but see a resemblance as Rios looked over some of his own favorite drawings.

The artist’s eye wasn’t set on Seward at first, but family and a scholarship offer helped him decide Seward was his best choice. Since that decision, Rios has found his place at Seward. He’s a familiar face in and around the art department as he fills in his artist’s palette with skills to complete his natural artistic ability. Rios works in almost every media of art–– his favorite being graphite pencil. He’s even begun dabbling in graphic design. His first graphic art design was a featured Telolith poster for the college literary magazine. Rios designed his Telolith poster by drawing a picture, scanning it, then adding the text in Adobe Illustrator. “I don’t like to do it technical-wise. I like to do it freestyle because it’s more my style,” Rios said. “I’m more of a freestyle artist. I don’t like to go by the rules.” Rios draws scenes from movies to keep practiced, but his passion lies in drawing images he’s dreamed up. And by drawing, Rios is able to release stress, which he says makes him feel more comfortable and confident. “There’s a lot of things that can inspire you to do art, but I guess the biggest inspiration is probably emotion,” Rios said. Last semester, Rios won the People’s Choice Award for 2-Dimensional art, but that’s not Rios’s only art accomplishment. From his sophomore year to his senior year at Liberal High School, Rios was named top artist in class, and in the 2009 Oklahoma Panhandle State University art contest, he placed first in the pen and ink and colored pencil categories. Rios believes one of the biggest prizes awarded through art are people’s expressions. “They’re priceless,” Rios said. Rios’s self-proclaimed brother-from-another-mother Jeff Goodrum believes Rios is truly talented. “Omar is an awesome, genuine guy that has an amazing future in art or in whatever he chooses to do,” Goodrum said. On weekends, Rios works for Gomez Trucking as a secretary making spreadsheets. Rios said his dream job would be to work as an artist for FUNimation Studios, which specializes in animé videos, but Rios believes his actual future lies in tattoo artistry. “Of course I want to be a full time artist, but depending on what happens here in the next three years, I’d like to do tattooing,” Rios said. Rios has also done several artsy jobs including air brushing shoes, T-shirts and a motorcycle gas tank; painting fans for a friend’s room and designing tattoos for friends. He looks up to people like martial arts master Bruce Lee and Portuguese footballer Cristiano Ronaldo, but his heart lies with tattoo artist Kat Von D, featured on the television show “LA Ink,” who he says is “amazing.” “I even bought Kat Von D’s book, and it was like $30,” Rios said. “I started reading it, but it was about the typical life of an artist, and I’m already living that, so I stopped.” Outside of living an artist’s life, Rios enjoys playing left or right midfielder and sometimes forward on a city league soccer team called Juventus, which placed second last year; teaching martial arts to his six students; tumbling; cutting hair; giving advice about relationships and life and playing songs by ear on the keyboard. In the campus’s student art club Kylix, Rios serves as vice president. “I wasn’t even anything,” Rios said. “They were just like ‘I’m going to give you a special job. I want you to be VP,’ and I was like ‘Awww. That’s cool. I guess that’ll work.’” As vice president Rios does his best to keep the club together, help out and make sure people are listening to the Kylix president Karem Gallo. “Omar is an important part of Kylix. He is always there when we have something going on. He helps out in everything Kylix does.” Gallo said. “Omar helps me a lot in meetings and helps me out just by being reliable and responsible.” “They say I’m a little louder, but I don’t think so,” Rios said. Rios lives at home with his family. He has three brothers and two sisters. “It’s pretty cool,” Rios said. “You always have someone to talk to, and it’s never lonely.” Rios believes his friends would describe as calm, laid-back, easy to get along with, nice and talented, and Goodrum would back him up on that. “He’s a thousand percent loyal, he always has my back no matter what happens, and he’s always there to help,” Goodrum said. Gallo also respects Rios and their friendship bonded by art. “Omar is a very talented young artist. His art work is amazing and it is very colorful and full of life,” Gallo said. “I love the fact I can ask him for advice or help on my own art work and he will help me out.”