Slow start to season for Saints 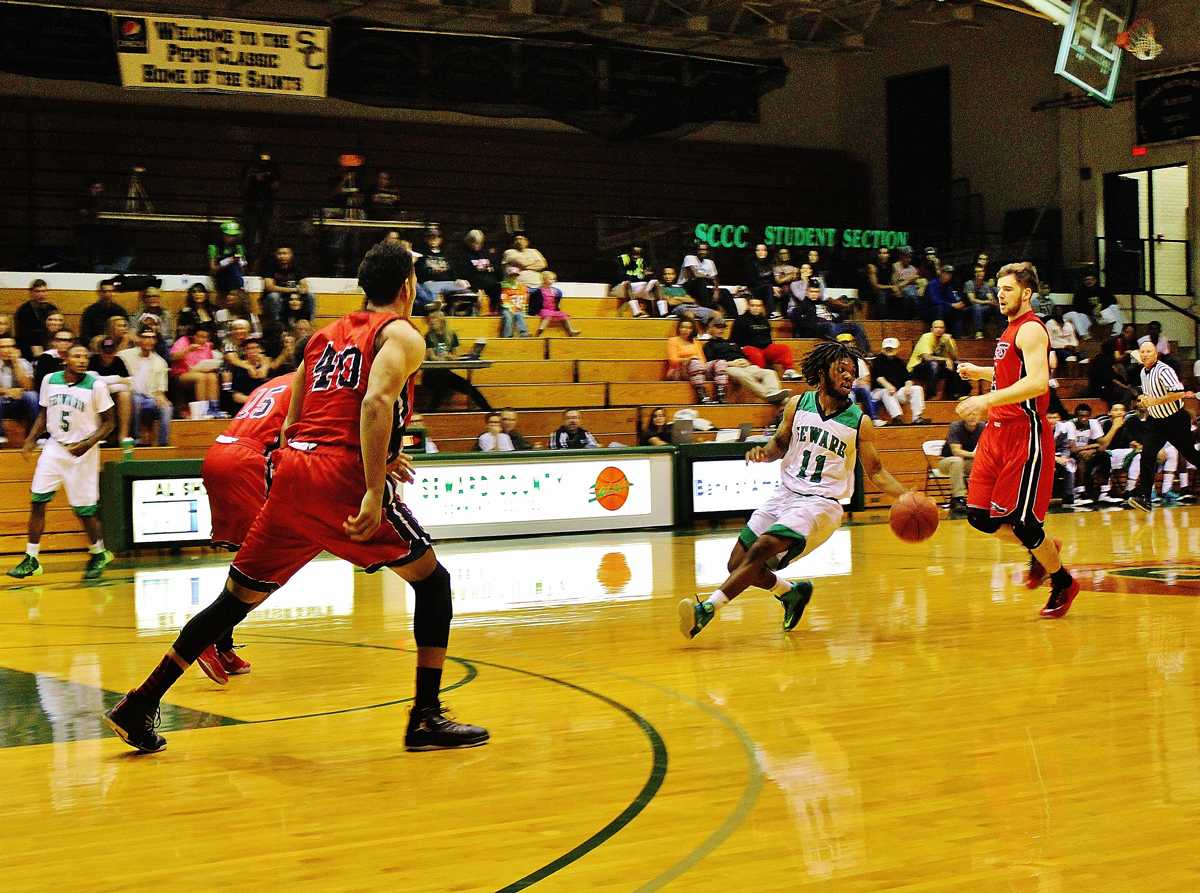 Crusader photo/Xochitl Gonzalez Tyreke Sharp slows down past half court while looking for a teammate to pass to against the Jets from Northern Oklahoma College-Enid. Seward lost the game 81-74. Sharp contributed to the game with six rebounds and 18 points on the night. Seward remains winless at 0-4.

The Saints basketball team remains winless at the start of the season, but look towards this weekend’s Billy’s/Days Inn Classic to pick up the first win of the season. The Saints will face Clarendon College on Friday and Frank Phillips College on Saturday. Both games will tip off at 8 p.m.

So far, the Saints have had to play without the Jayhawk West 2013-2014 Freshman of the Year,  Stevenson, who is out for the season with a knee injury.

Head coach Bryan Zollinger said, “While losing a player of his caliber is never good, our goals and expectations have not changed. We are playing a very tough schedule to prepare us for Jayhawk West play. We practice hard every day regardless of whether we win or lose. We try to implement a game plan that will give our players the opportunity to be successful.”

Clarendon College is 2-5 for the season, coming off of two close losses; one in overtime and the other loss just by two points.

Brad Vanden Boogaard, head coach of Clarendon, said, “We have been very inconsistent, causing us to loss three close games. I expect us to play hard and improve in three areas; rebounding, taking care of the ball, and defensive transition.”

Some players to look out for from Clarendon are D’tavian Walker, Marcus Ellison, Johnnie Brown.

Frank Phillips College is 4-1, coming off of their first loss of the season.

Chris Hackett, head coach of the Plainsmen, said, “We started out 4-0, but had a tough loss on the road [Tuesday] night to NW Tech, falling 89-83. I am hoping for a great response after out first loss of the season. I am looking for a great effort and for us to play a lot harder.”

Some players to look out for ,according to Coach Hackett are Stan Whittaker who is the point guard for the Plainsmen, Rokas Paulauskas who is the center and does a lot of the dirty work inside, and Alize Johnson who is a freshmen with a lot of versatility and potential.

While the start of the season has not been ideal, the classic for this weekend gives the Saints a chance to show improvement.

According to Zollinger, some of the challenges that the Saints have faced are poor shooting from the three-point line, too many turnovers, and poor offensive flow and execution.

“[We are] practicing hard to eliminate our weaknesses and problem areas,” said Zollinger. “We constantly try to stress the concept of progressive, sustained and incremental improvement on a daily basis throughout the season. We have to become tougher both mentally and physically in order to make those other things happen.”

With conference play still a couple months away, the Saints team will use these games to help prepare to defend the Jayhawk West title.