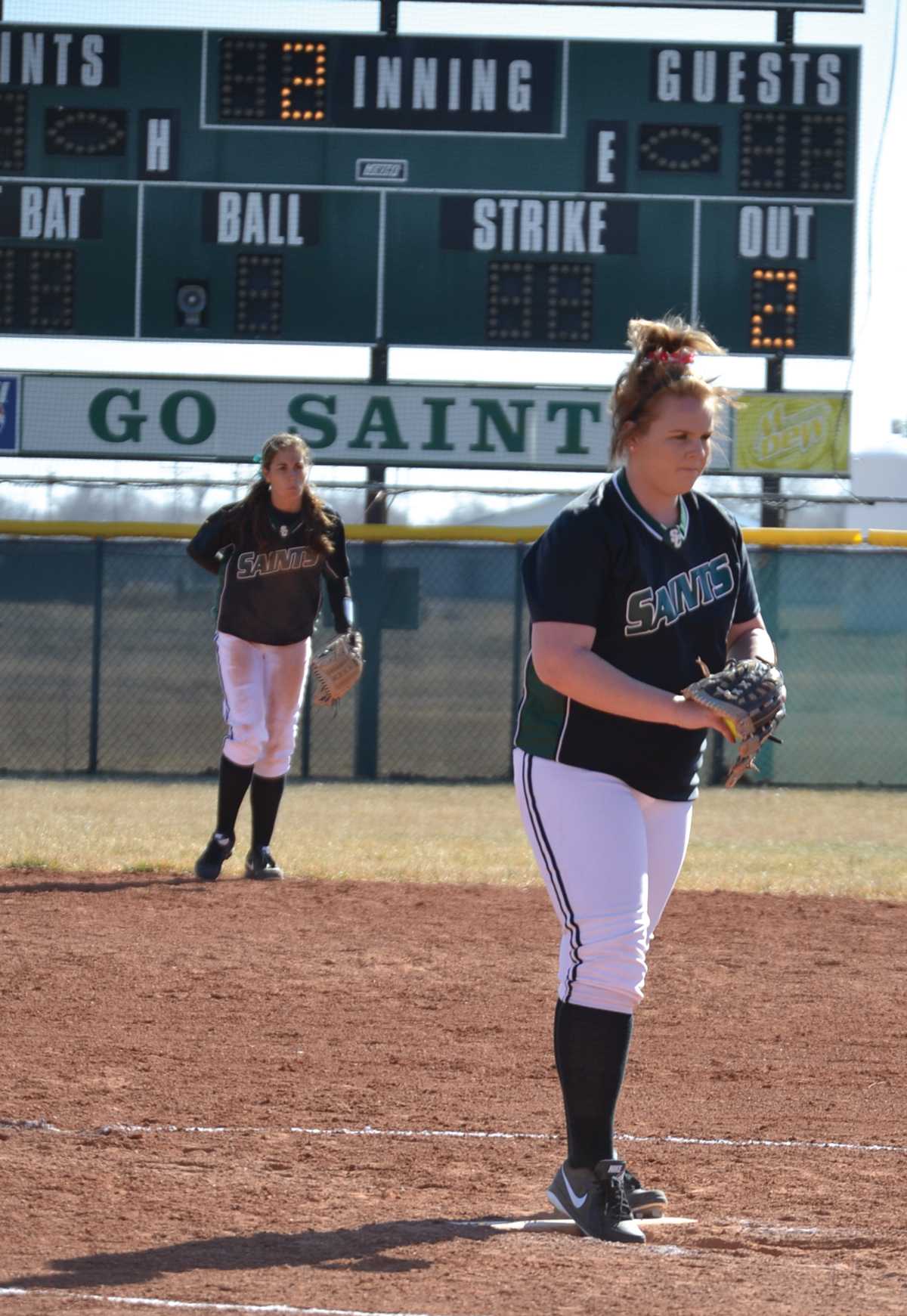 Crusader photo/Jose Medrano Brittney Sharkey prepares to pitch during the Lady Saints match against Northern Oklahoma-Tonkawa Feb. 9. Sharkey received the KJCCC Player of the Week award for the week of Feb. 10-17.

With a round of unique handshakes in a specific order with her teammates and the tune of “Headstrong” in her head, Brittney Rachelle Sharkey is ready for the game.

This “California Girl”, is a sophomore this school year, and a pitcher and infielder for the Lady Saints softball team.

Recently Sharkey attained the title of Best in the West from the Kansas Jayhawk Community College Conference.

She was pitcher of the week from Feb. 10-17, this was also the second Jayhawk West “Pitcher of the Week” that she has received in her career and was her first for the 2013 season.

Sharkey is from Riverside, Calif. She is the daughter of Robin and Terry Sharkey; she has two sisters, Katie and Alyse.

Her family now lives in Wichita, for which she is thankful. Now her relatives are closer and she can spend time with them on the weekends and they can come to support her at games, according to Sharkey.

Sharkey initially began to play softball when she was 4 years old. She became interested in the sport because her dad played slow-pitch. She “loved the game at heart” and pursued it, and continues to play softball.

She also had special inspiration to pursue softball in memory of a friend who had passed away, “I wanted to continue with it, since she was not able to. That’s why I play and want to further my collegiate career,” Sharkey said.

Softball has made a large impact on her life, and the lessons she has learned as a team member are what she most values.

“It helps in all situations, helps with team building, becoming a more open, friendly person, and is a valuable skill to have,” Sharkey stated.

Sharkey became interested in Seward County because of the way the coaches approached her, and she decided that SCCC/ATS would be a nice small school to begin her college career with.

She enjoys the atmosphere, and feels that the people on campus are very friendly and hopes to do her best for the team.

“I hope we do well, can go to regionals, and then on to nationals. I feel good about this year,” Sharkey said.

As for personal goals, she hopes to make “Pitcher of the Week” another time, have as few as possible home runs hit off her pitches and help her team take on regional and national competition.