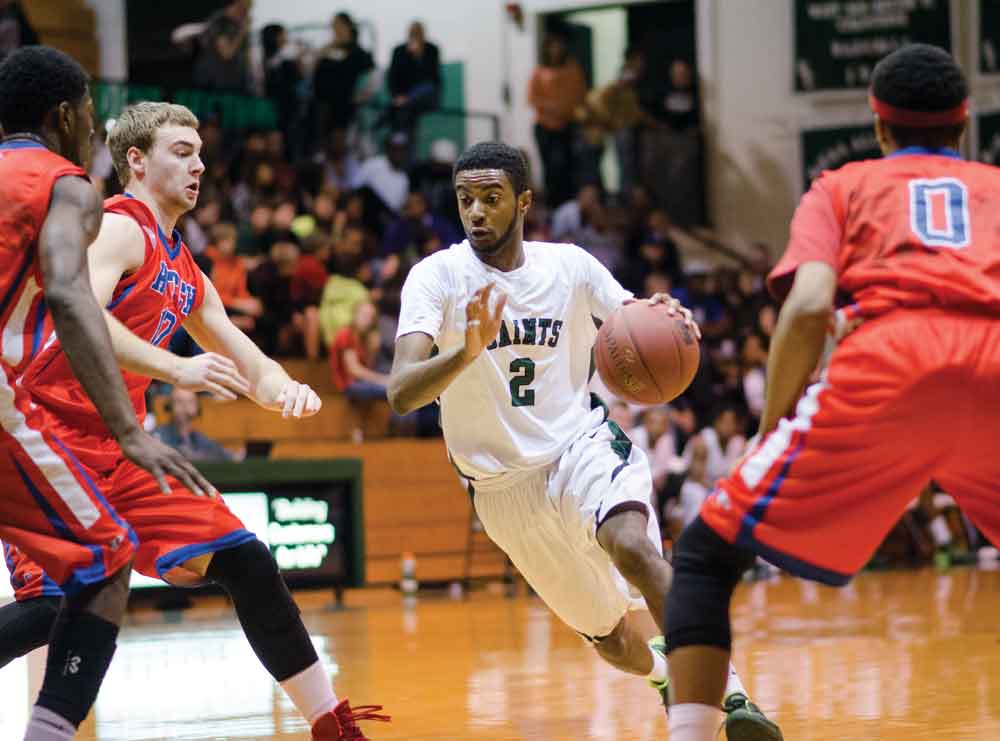 Crusader photo/ Jakub Stepanovic Niem Stevenson, who was named an NJCAA All-American, drives to the lane against Hutchinson. The Saints freshman averaged 19.3 points per game on the year, 1.6 steals and 5.3 rebounds per game.

After one of the best freshmen years in Seward County history, Niem Stevenson took home a NJCAA 3rd team All-American award.  Stevenson acknowledged his teammates’ role in the honor.

“Feels really good to win the award, but honestly there is no way I could have done it without my teammates,” Sevenson said.  “They always put me in great situations and had the belief in me to get it done.”

Stevenson, who cited Coach Nee as the reason he is at Seward, was amazing his freshmen year at Seward.  He lead the team in scoring at 19.3 points per game.  That was seven more every night than any other Seward player.

Stevenson, just like a fine wine, got better with age as he played like a man on a mission in Jayhawk West play and then in the Region VI Tournament.

Stevenson on average scored 18 points per game in November to open the season.  Then he began to heat up in conference play averaging 21 points a night. His last three games in the Region VI Tournament, believe it or not, Stevenson took it to a whole other level, averaging 27 points per night.  Stevenson, who put up 30 points or more four times, scored his career high against Garden City with 36 points.  While Niem scored with ease, he also did other things, averaging 1.6 steals a game and 5.3 rebounds per game (Second on team).

Stevenson helped the Saints basketball team achieve a first with the award, as this is the first time ever that the Saints have had NJCAA All-Americans in four consecutive seasons.

Stevenson is also the first freshmen since Carlo Walton to receive the award.

Stevenson commented on his mindset was throughout this year.

“I just wanted to be the best player I could be, improve my game everyday, and ultimately win.”