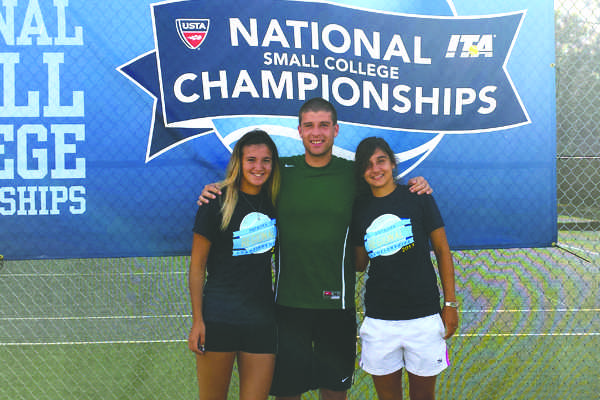 The women’s Seward County doubles team of Paula Coyos and Paula Lopez also made a run for the title at the ITA National Tournament and placed third at the overall. “It was difficult. All of the opponents were tough, but we knew we had a chance in every match,” Coyos said. That perseverence pushed her and Lopez to keep hopes high despite losing their run to the title. Lopez and Coyos showed that their presence was going to be a problem for the other teams. The duo first beat third seeded Owen and Chowdhary from Mississippi Gulf Coast Community College 6-1 in both sets. Their next opponents were not any easier. Pietersz and Savva from Tyler JC were ranked second in the tournament. After a slow start, they found themselves losing in the set 4-0. Even though they managed to get within one game, Savva and Pietersz won the first set 6-4. The second set was even closer at 3-3. Yet the duo from Tyler won the remaining games to take the set 6-3. Pietersz and Savva ended up winning the ITA National Tournament “I injured my knee, but I never stopped playing because I wanted to finish the match even if I was hurting. We played with the team that took third last year and with the team that won Nationals [this year], which for me was a very good experience,” Coyos said. Even though they could no longer win the national title, Lopez and Coyos continued to play for third. In the third place match, they beat Olivia Erlandsson and Jazz Whittaker from St. Petersburg College. Seward won both sets with the score of 6-4. Coyos said, “As we advanced through the tournament I felt very proud of what we accomplished by defeating some of the best teams. I couldn’t believe we were actually advancing through to third place.We would like to thank Seward County and the President of the College for giving us this unforgettable opportunity. We are going to keep improving and continue on to hopefully win nationals next year.” By placing third at Fort Myers, Lopez and Coyos added their name to the few Saints who have gone to the ITA National Tournament and placed.