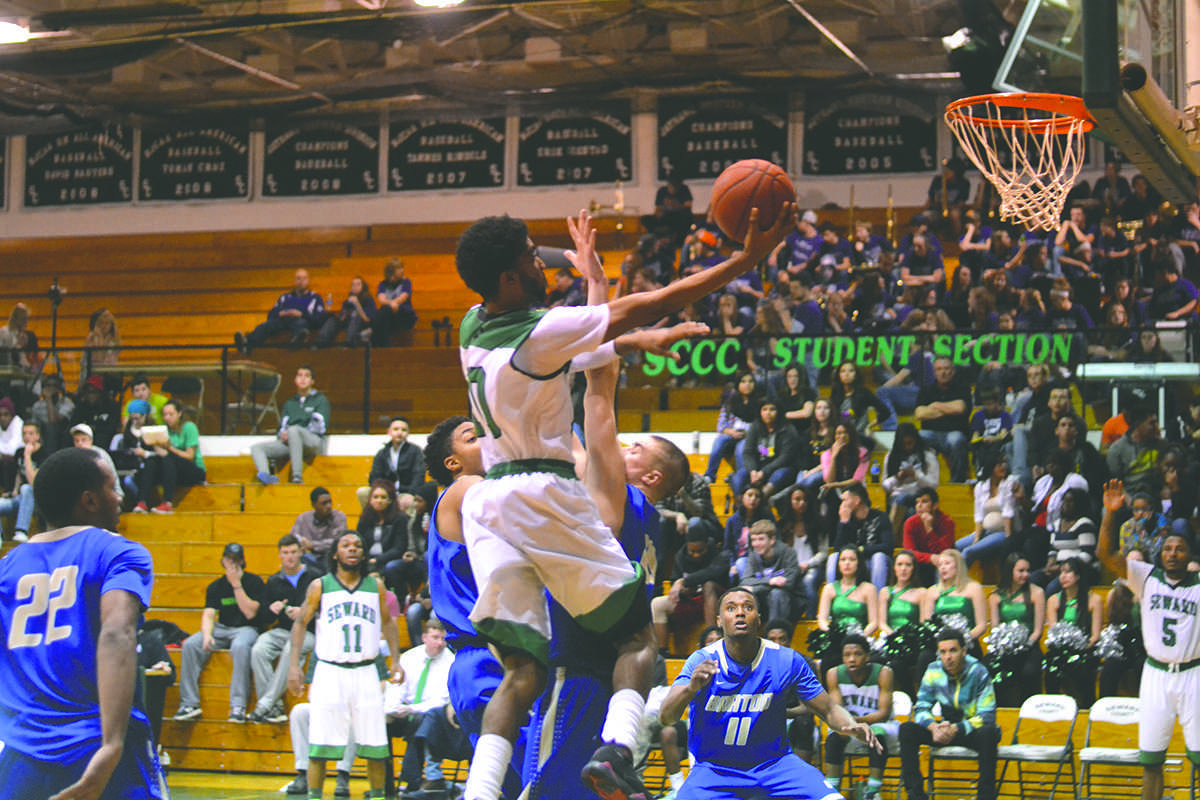 Crusader photo/Diana Chavira Kevin Sims goes up for one of his 26 points scored for the night against Barton County. Sims reached a new career high that included shooting 17 times from the free throw line and helping put Seward in the lead.

Saturday night in the Green House was a turnaround for the Saints as they defeated Barton County after taking a loss to Cougars just weeks prior.

The Saints have so far had an even number of wins and losses and their standing is at 11-11. Improvment in teamwork was evident in the performance the team exhibited. Barton took the first lead of the game at 7-0, but Seward quickly picked up the momentum when they closed in on Barton 12-10 and finally tied the game at 15.

Nick Singleton gave the crowd an incentive for cheering when he went up for a dunk and was later followed with a three from Kevin Sims. Tyreke Sharp also threw yet another three for the Saints to finish off the first half of the game with a six point lead, 40-32.
The Saints did not hold anything back in the second half of the game as they steadily kept their lead against the Cougars.

Only a couple of minutes into the second half the Saints pushed their lead into double digits and left Barton trailing with a 24 point difference.

The Cougars tried to come back from their plummeting score but were unable to catch up to Seward’s solid play. Saints took the match 89-76 and also gained their first win over a ranked team this season.

Through their win over the Barton County Cougars, the Saints were also able to bring out the best in some of their players.

Sims scored a career high of 26 points and also shot from the free throw line 17 times. Singleton as well had seven rebounds and Evan Allen helped with eight assists.

The last time the Saints went up against the Cougars they did not have such a fortunate turnout. Seward was defeated with a 24 point lead by Barton, and it was also the Saints worst Jayhawk West conference loss in 7 years.