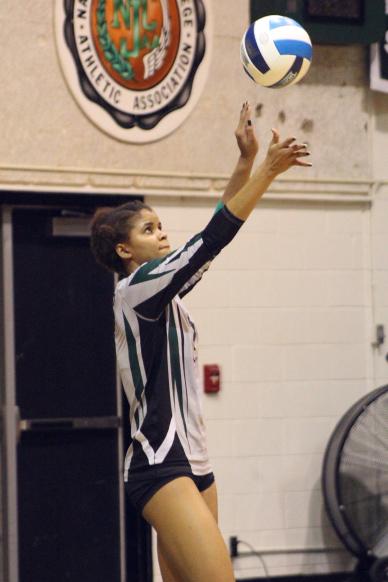 Putting up just under four kills per set while hitting at a .362 clip on the week, Seward County sophomore Maritza Mesa was honored by the Jayhawk Conference on Tuesday as she was named the league’s Player of the Week for week two of the 2016 season.

Mesa continued a solid start to her sophomore campaign this week as the Lady Saints got into Jayhawk West Conference action for the first time. She averaged 3.86 kills and 2.29 digs per set for Seward while hitting .362 in a pair of matches. Wednesday against Hutchinson, Mesa was a lone bright spot for Seward, finishing off 10 kills and pulling up 6 digs in a three set loss to the Dragons. Friday she ramped things up in the Lady Saints home opener against Butler, banging home a match high 17 kills on just 32 swings to hit .438 while also chipping in 10 digs for her third double-double of the year.

Mesa and the Lady Saints sit at 5-2 overall and 2-1 in Jayhawk action on the year and will see the court again on Friday when they travel to Odessa, Texas to take part in the Odessa College Invitational.