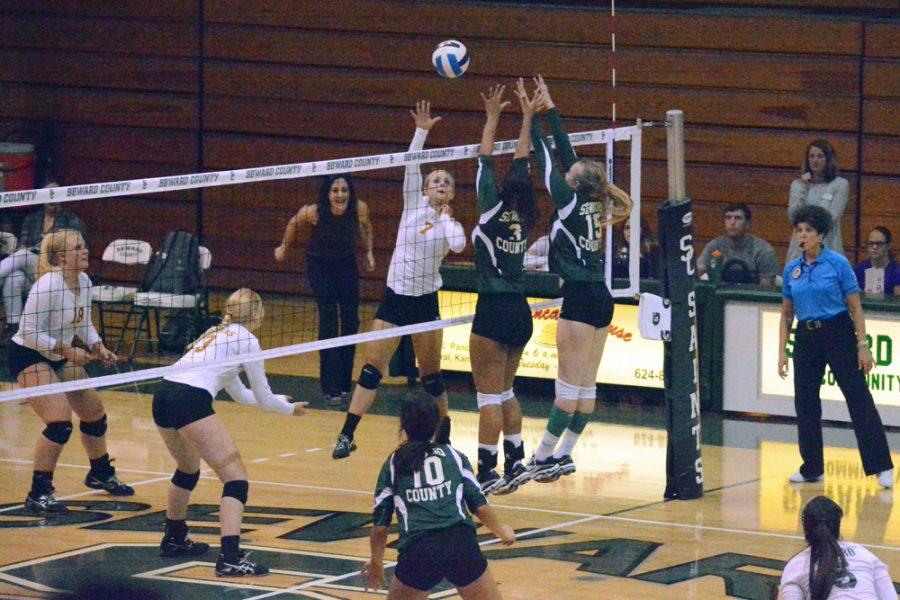 The Lady Saints volleyball team won 3-0 against the Garden City Busters finishing off the match with a decisive victory. They are currently 10-3 in their season and are 4-1 in the Jayhawk West Conference.

They started off slow in the beginning of the first game, but came back to win the first set 25-21. In the second set, they defeated the opposition with an astounding score of 25-10 and finished it off with the third match ending at 25-16.

“We played good, we played hard. We practiced for this and we worked the max for this,” said player Kimberly Diaz, sophomore from Humacao, Puerto Rico.

Even though in the first set the lady busters got four points right of the bat, the Lady Saints quickly came back to tie it 4-4. It was head to head most of the game, but the team finally got the win.

“I think it was a solid win. We started a little bit slower than we’d like to,” said Thias B. Allen, head volleyball coach. “We had a set game plan and we couldn’t really execute in our standpoints of the game, and we came back and set our tone so that helped us get back in the game to win the first game.”

In the second set the team dominated the court with Maritza Mesa finishing off the game with a pair of kills to finish the game.

During the third game, the Lady Saints fought hard and secured the win to finish off the match without dropping a set.

“The third one… it was hit and miss, miss and hit and some other things we did, but we were still able to execute our plan and not make as many mistakes,” Allen said.

Seward had a lively night with a full crowd at the Greenhouse. Students and the community came out to support their school. There were also local teams that came to show support, including the West Middle School and West High School volleyball teams.

Allen said in response to the crowds, “I just want to thank our fans. It was a great show. I think our green seats were almost full.”