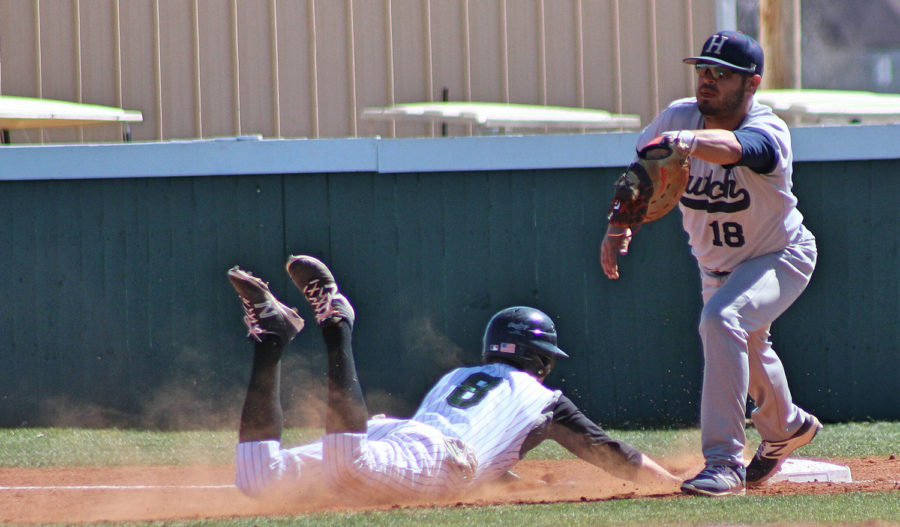 Outfielder Timothy Fitzgerald gets down and dirty with an attempt to make it back to first base. Fitzgerald has managed to get one RBI this season.

A home field advantage didn’t help the Saints over the weekend, March 4-5. The baseball team dropped a pair of doubleheaders against Hutchinson Community College, losing four in two days time..

On Saturday, the Dragons outhit the Saints 11-6 in the contest with Addison Kaasch and Jacob Nielsen combining for four of the Saints six hits in the game.  Jared Biddy took the loss on the mound for Seward, falling to 1-3 on the year despite striking out a career high 10 in 4 2/3 innings worked.

The Saints didn’t fare any better on Sunday. They lost 19-9 and 12-0. The highlight for the Saints on offense came in this game with four home runs hit by Montana Newell, Jared Biddy, Cody Stineman and Cody Coontz.

The Saints are swept in a Jayhawk West Conference home series for the first time in program history after the Dragons swept the first series period from Seward three years ago at Hobart-Detter Field in Hutch.  Seward falls to uncharted waters at 5-14 overall and 0-4 in Jayhawk West Conference play to begin the year while Hutchinson runs their win streak to 13 as they improve to 13-2 overall and start league play 4-0.

Seward will have a midweek tilt to try to get things rolling back in the right direction Wednesday against Frank Phillips before returning to conference play Saturday and Sunday at Stanion Field in Pratt where they will take on the Pratt Beavers in a four game set.