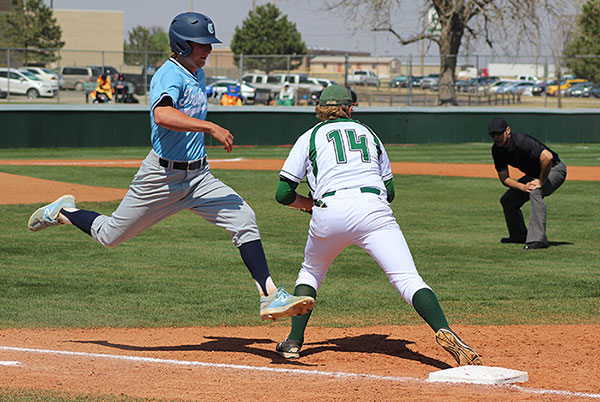 Freshman Jacob Nielsen, ready in stance to record an out. Nielsen has had eight RBI's (Runs batted in) so far this season.

It was ‘close but no stogie’ for the Seward County Saints at the end of the day on Sunday at Brent Gould Field as they came up simply short 5-4 in one of their doubleheaders with Colby. and dropped a 10-4 additional innings choice in diversion two to drop their first historically speaking arrangement in Liberal to the Trojans.

Colby bounced on the load up first in amusement three of the arrangement as they set up together a string of two out hits in the second to score three circumstances and take a mid 3-0 lead.

The Trojans included another two out keep running in the third to make it a 4-0 diversion and counted their fifth keep running of the amusement in the fourth to extend their preference to 5-0.

Seward couldn’t move anything on offense until the seventh when they at long last got through against Colby’s Bryce Fraser. Sophomore pitcher Brian Tims, helped himself with a twofold down the line to score a run and make it a 5-1 diversion and he and also Jacob Nielsen scored when Law Greiner lifted off on a three run grand slam to get Seward to inside one at 5-4. That was as close as the folks in green would get however as the following Saints hitter grounded out, successfully finishing the amusement in a 5-4 Colby triumph.

Each side had six hits in the challenge. Tims was the main Saint with different hits in the misfortune while Greiner had three of Seward’s four RBI’s in the diversion. Tims wrote off the hill, taking care of business while permitting six hits and five runs while striking out seven to tumble to 1-5 on the year.

The Saints then had their opportunity to win it as they got a two out walk and a Colby tossing mistake to put a runner on third with two outs. It looked like Seward had a stroll off win as Nielsen singed a ball to right, yet a jumping play by the Trojans in the outfield squelched that idea and sent the second session of the arrangement to additional innings.

Colby stacked the bases without a hit in the tenth and immediately cleared the bases with a one out triple to take a 7-4 lead. They kept on kicking the Saints when they were down with consecutive two out duplicates, scoring three more circumstances to make it a 10-4 amusement.

The Saints tumble to an exceptional 10-21 by and large and 3-9 in Jayhawk West play where they now sit in eighth place, only one diversion in front of Pratt. Colby wins their first since forever arrangement at Brent Gould Field, enhancing to 19-14 generally speaking and 11-5 in meeting play.