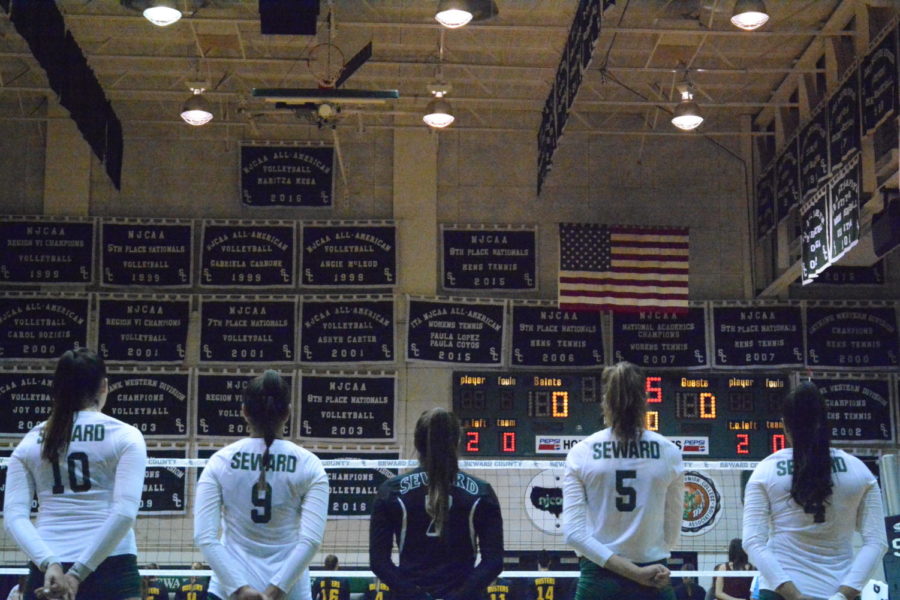 The Lady Saints line up for a pre-season game for the National Anthem. The banners in the Greenhouse are constant reminders of what's expected of their team — to win championships.

After the success of the 2016 season, the Seward County Lady Saints have high hopes for this upcoming season. Based on a pre-poll, the Lady Saints are projected to finish second in the Jayhawk Conference, and are currently ranked 18 in the nation.

Coach Thais Baziquetto-Allen will return at the helm for her third year at Seward County Community College. Of the roster from last year’s National Tournament team, five players are returning. Out of the five, only one of those players did not see court time during the tournament.

“We definitely saw a lot of improvement during the spring season..” Baziquetto-Allen said.

“I always want to do more and more than I already have,” Nascimento said.

After Viana was red-shirted for the 2016 season due to a knee injury, she is back in full force for the 2017 season. “I never want less than I already have, so I am always looking for more. I have high expectations of myself,” Viana said.

All five ladies are returning stronger than before and are ready to take on this season. “We definitely saw a lot of improvement during the spring season,” Baziquetto-Allen said.

Scout Torres, Nathiellen Machado who is a libero, Esmadar Tavares a setter, Giovanna Tapigliane a right side and Luz Sierra a middle hitter and right side are the new freshmen players.

“She is really fun to watch, she brings a spark to our defense,” Baziquetto-Allen said about Machado.

The toughest game of the season for the Lady Saints is projected to be against Hutchinson Community College. “I think HCC will be our toughest game this season. They used to have a good, strong team. It has always been HCC and SCCC competing for 1st place ,” Viana and Nascimento said.

One of the main goals for the Lady Saints 2017 season is to reappear at the National Tournament.

“We need to work hard and play together, every time, every day,” Nascimento said.