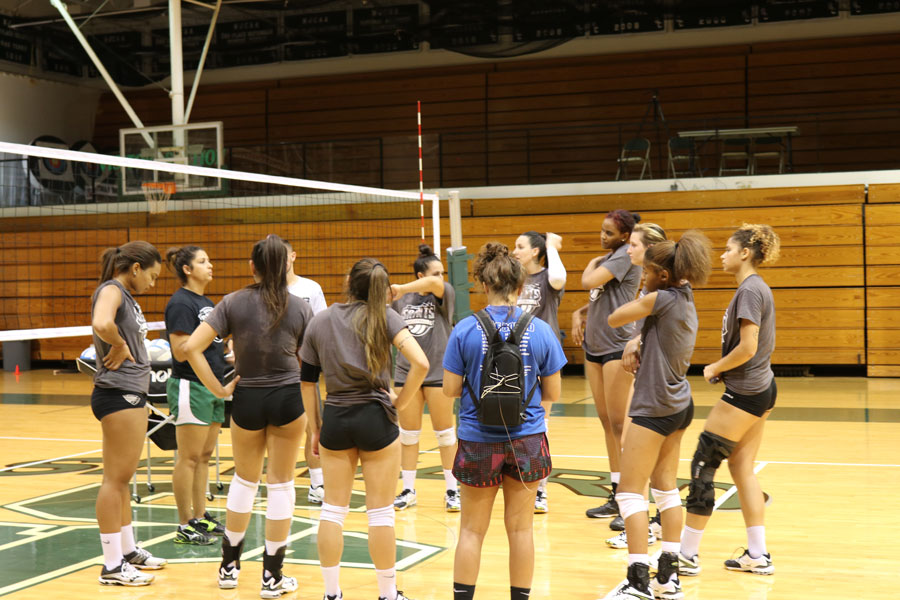 The Lady Saints gather around Coach Thais Allen to discuss about what they are going over during practice.

The Seward County Community College Lady Saints headed to Roswell, New Mexico on Friday,  Aug. 25, to kick off the 2017 season. The NMMI Kick-Off Classic produced some exciting events for SCCC; The Lady Saints ended the weekend strong and for the first time since 2014, they will the start the season off, undefeated, with a 4-0 record. Another major event for SCCC was Outside Hitter, Viviane Viane, having a 25/25 performance, the first one in Lady Saints Volleyball history.

To begin the NMMI Classic, SCCC took on former regional runner-up, Odessa College. The Lady Saints had a slow start against the Odessa Lady Wranglers; beginning with a 32-30 loss the first set. The Lady Saints came back with more effort for the second set, and with the help of Brianna Domino and Luz Sierra, ended up on top with a 25-17 lead. The next set would be the closest, ending in a 26-24 victory for SCCC. Odessa College was down 1-2, but fought back, winning the fourth set 25-20.

As for the fifth and final set, the SCCC Lady Saints refused to give up, and came out on top with a 15-12 win, winning the match: 3-2. This was a big moment for the SCCC Lady Saints. Not only did it give the ladies the moment to remain undefeated for the rest of the weekend, it also happened to be a historical marker.

Red-shirt sophomore, Viviane Viana, had a phenomenal performance. She ended the game with 26 kills and 27 digs. This 25/25 performance has been the FIRST in SCCC Lady Saints Volleyball history. “I am really happy. It’s a feeling i cannot explain,” Viana stated, when asked how it felt to make program history.

After the defeat of Odessa College, The SCCC Lady Saints were excited and ready to take on the rest of the weekend. “We are expecting to stay strong on teamwork and win. We need to keep the offense good, spread the ball around. We just need to continue running the game and improve our game as a team,” Coach Allen stated, Saturday morning after the historical game.

Next up for the Lady Saints came Pima Community College. PCC came easy to SCCC due to the momentum from the first game. The first set was no match for the Lady Saints. Viana, performing exquisite once again and helped contribute to an early lead and a 25-11 win. The next set was back and forth and required more effort from SCCC. With helpful contributions from Briana Domino and Giovanna Kuntze, the Lady Saints regained the big lead and pulled through with a 25-17 win. Having the same 25-17 score to finish the match, the third set mirrored the second. Points were traded back to back; but, after a kill by  Esmadar Tavares, the Lady Saints regained their momentum and finished the match with a 3-0 win.

The Lady Saints started off strong in the first set by capitalizing on any SMCC errors in addition to a few clutch kills by Giovanna Tapigliani, which all created a 25-18 win. For the last two sets, the Lady Saints had no trouble pulling together for the win. Plays by Giovanna Tapigliani, Luz Sierra, Viviane Viana, Mariana Nascimento, and Giovanna Kuntze would tie down the undefeated title for the weekend with  25-14 and 25-12 leads.

The Lady Saints are excited about the start to their season, and have higher expectations and will continue to improve for the 2017 season. They will begin conference play on Monday, Aug. 28, against Barton Community College in Great Bend, Kansas.