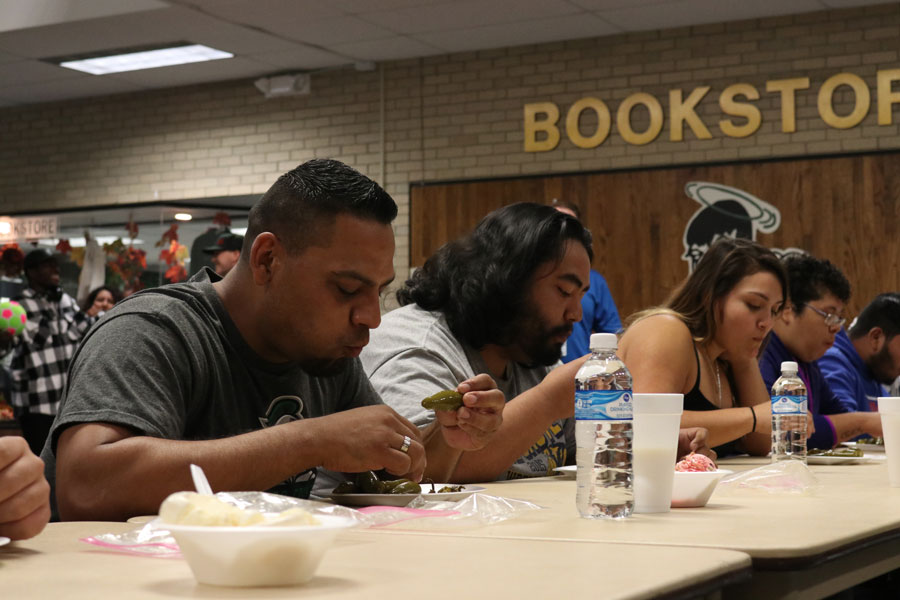 SCCC students rush to eat the pickle jalapenos in the contest. The contestants were able to remove the stems before the contest started to make the jalapenos easier to eat.

With shaking hands and watering eyes, Jose Alvarado took the table to defend his title as the quickest jalapeno eater at the Seward County Community College Annual Jalapeno Eating Contest during Hispanic Heritage Month. While some could handle the heat, others had to get out of the kitchen.

The nine contestants got ready by sitting in chairs on a line of connected tables while some removed the stems off the jalapeños and others squeezed some of the juice out of the jalapeños.

The scent of pickled jalapeños filled the air. As the rules were being explained, the contestants face’s were focused. When motioned to start, it got serious, eyes were sharp and hands were shaking.

Back to back champion, Alvarado, came in HOT, knowing he was going to win: “Absolutely, I knew I was gonna win coming into this, so it just helped, it just.. sorry I can’t even talk right now, I’m burning,” Alvarado stated before walking away to grab some milk.

Being the returning champ, Alvarado had some tips for people wanting to eat jalapeños in a heated manner.

“Don’t think about it, fight through the pain and you’ll become successful,” Alvarado stated.

While Alvarado ate each jalapeño in stride, Melvin Augueta, a diesel mechanic major, struggled behind. Two bites, a couple seconds and he was done.

“My first thought after biting into my first jalapeño was ‘I’m gonna throw up!’” Augueta argued that had they been “the real ones,” he would have done “way better.”

More activities will be on campus throughout the month:

Oct. 4: Lunch and Learn “Flour Power:” Presentation about the history of the humble tortilla. Noon at the SCCC library. Lunch served