SCCC remains undefeated at the Greenhouse 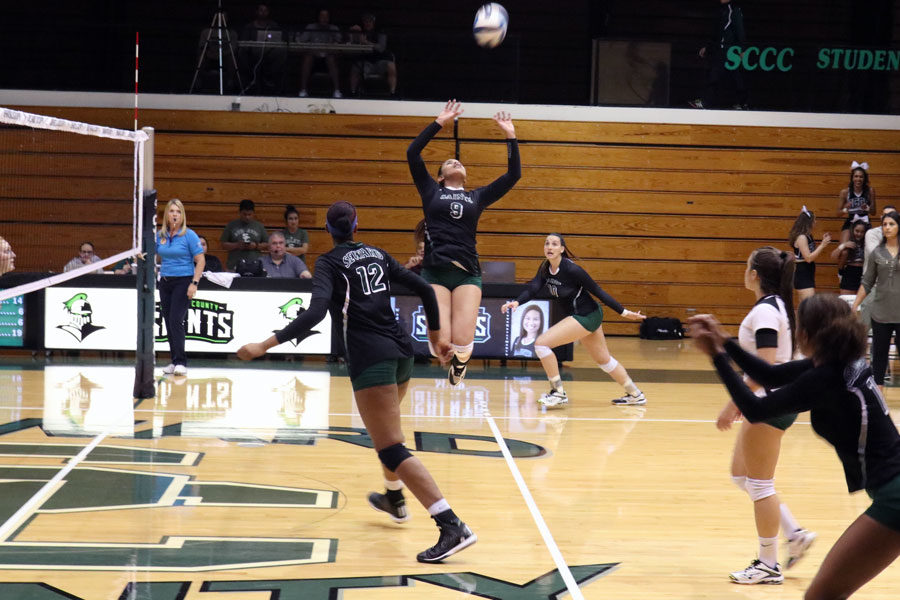 Esmadar Tavares prepares to set the ball to Giovanna Tapigliani. The Lady Saints remain undefeated on their home court.

In the beginning of set one, Cloud County showed no fear against SCCC by keeping the score close. After crazy amounts of spikes coming from the Lady Saints, they began to start taking control of set one.

Mariana Nascimento was the key player for set one, by having six points; four coming from her kills and two from blocks. Even though set one looked close in the beginning, Seward came out with a 25-19 win.

The fans seemed to show much love for Luz Sierra as they cheered and yelled for the Lady Saints to dominate Cloud County. Sierra, Giovanna Tapigliani, and Nascimento had two points a piece. The Lady Saints finished the second set with a score of 25-19.

In the final set, the Lady Saints seemed to struggle but quickly recovered from their unusual errors. Seward was up 22-9. Two straight striking Tapigliani kills followed by a Sierra kill gave Seward the easy victory, 25-9.

“Our serves and passing were our strongest points tonight. We were able to get a lot runs and we were able to run a good offense from the passes,” Coach Thais Allen said .

Upsetting Cloud County marks the Lady Saints 23 straight victory. After tonight’s game, Seward stands with a 26-1 overall and 11-0 in conference. We are definitely seeing history in the making here in Liberal.

The Lady Saints will be back at the Greenhouse on Saturday, Oct. 14, to compete against Pratt Community College at 6:30 p.m.