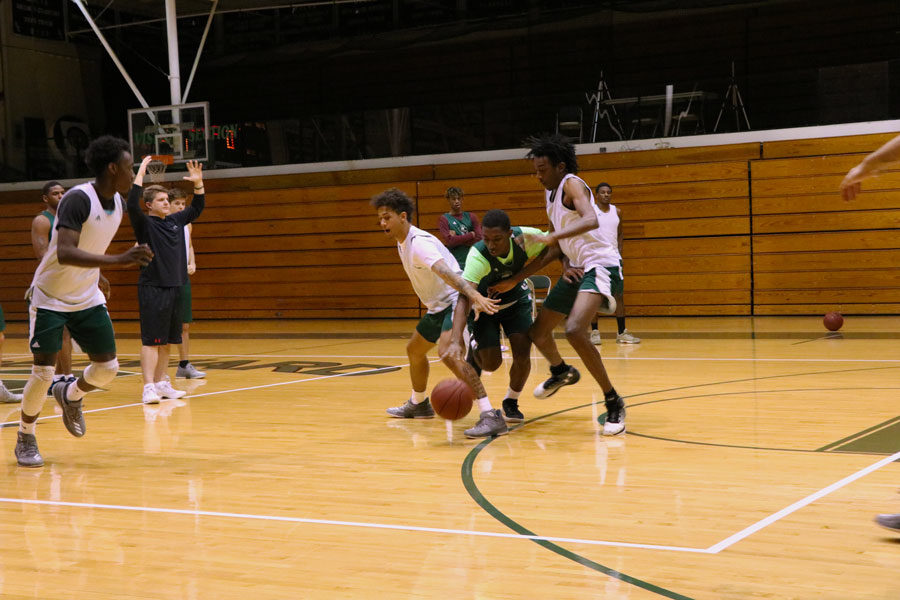 Freshman Jamel Horton attempts to dribble in between defenders Anthony Thomas and Isiah Small. The team was scrimmaging half-court and mainly focusing on attacking to the basket.

After a tough 2016 season, the Seward County Saints are looking to bounce back and seek for success during the upcoming season. From looking at last year, the Saints are wanting to have a better overall record and to have the chance to possibly compete at the National Tournament.

Head Coach, Jason Sautter will be at the helm for the Men’s Basketball program at Seward County. Sautter spent two seasons with the Saints in 2011-2012 and 2012-2013, helping lead SCCC to a Jayhawk West Conference Championship in both seasons.

Sautter will be assisted by SCCC’s new Assistant Coach, Luke Adams. Adams is a Texas Tech alumni; he played basketball for four seasons as a Red Raider. Adams also starred for the USA Deaf National Team, competing in the Deaflympics in Bulgaria in 2013, helping the US to a bronze medal performance while averaging 10 points per game on Team USA.

“I think with the 19 guys we have, they are all capable of contributing. Our depth in shooting will definitely help us out and our style in the way we want to play will also help,” Head Coach Sautter said.

The Seward County Men’s Basketball program is having a complete remake of the roster for this upcoming season, having men from different parts of the US and foreign countries such as Argentina, Tunisia, and Czech Republic.

“Having scrimmages and practices shows who can do what against really good competition. Also, to see who can play the best together as a team,” Coach Sautter said.

The SCCC Saints basketball season will officially begin on Wednesday, Nov. 1 against Clarendon in the Greenhouse at 7p.m.

“All of the games we are going to have this season are the ones we are looking forward to. There is not a single game on our schedule that we are mainly focusing on,” Coach Sautter said.

One of the main goals for the Saints this upcoming season is to have a great overall record and to possibly compete at the National Tournament.

“I want us to learn and compete everyday. We [don’t have enough talent] to show up and win a game, especially in our league. There’s no player on the floor that can show the other guys what it takes for our league,” Coach Sautter said