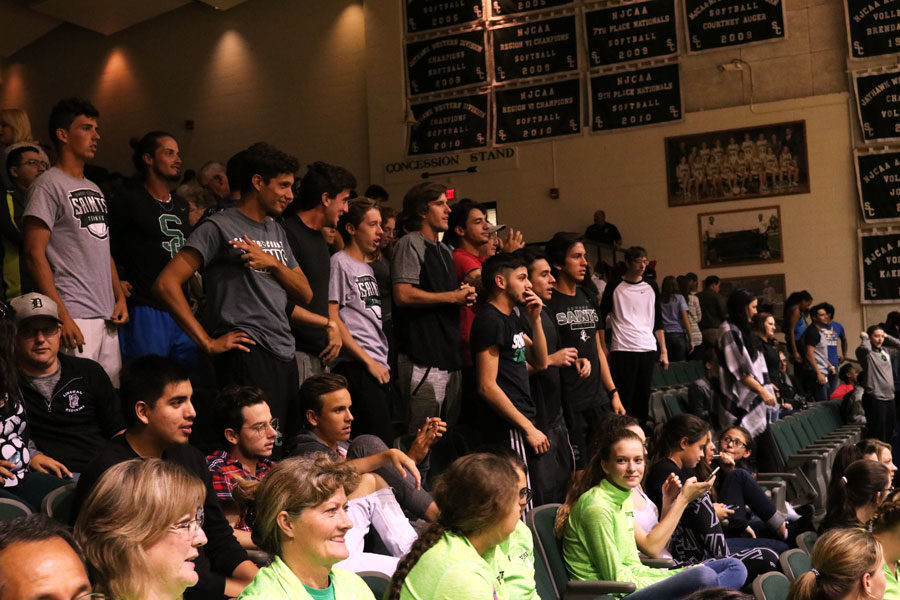 SCCC rowdy crowd consists of mostly the men’s tennis team. The rowdy crowd get’s very loud throughout the games, especially if the moment is highly intense.

The SCCC rowdy crowd is a big part of the Lady Saints Volleyball team’s undefeated in the Greenhouse record. The rowdy crowd consists mostly of a variety of student athletes, but on Wednesday, Oct.11, it was more men’s tennis players. At the home games, students gather close to the court in the middle of the stands to cheer for the Lady Saints.

In the second sets, The crowd chanted “let’s go #1, at the Cloud County libero each time she messed up. “Amazing #1, let’s go #1, Where are you #1?” they continued to cheer whenever she would enter or leave the game and cause an error.

Each time a cloud player would mess up, the boys would chant “Let’s go & then the # of the player who made the mistake. When a Cloud County girl served, they would shout things like, “Uh Oh #16” or “No pressure.” As soon as the served crossed the net into Lady Saint territory, they shouted, “That was an easy serve!”

When the Cloudy County libero finally made a good pass, the rowdy crowd chanted. “Finally #1,” they would shout.

For the last two points of match two, the rowdy crowd clapped. Since the tennis boys are from other countries, & most of the volleyball team is brazillian, They would yell things in different languages to our athletes. During the third set, every time a cloud player would have an error, Saints in the stands would chant “Oohhhhhhhh.”

Volleyball player, Luz Sierra, has been out for a few games; the Cloud County game was her first game back and she was pumped. To help her be more motivated and go up for more hits and blocks, the boys would scream “rompe la cabeza”, which translates to “rip her head off.”

In the last set of a volleyball game, Saint’s fans always stands for the final match point. This is the part of the game that the rowdy crowd and everyone in the stands waits for. Finally, when the Lady Saints take the game, the crowd cheers and claps loudly for another Saint’s Volleyball victory.