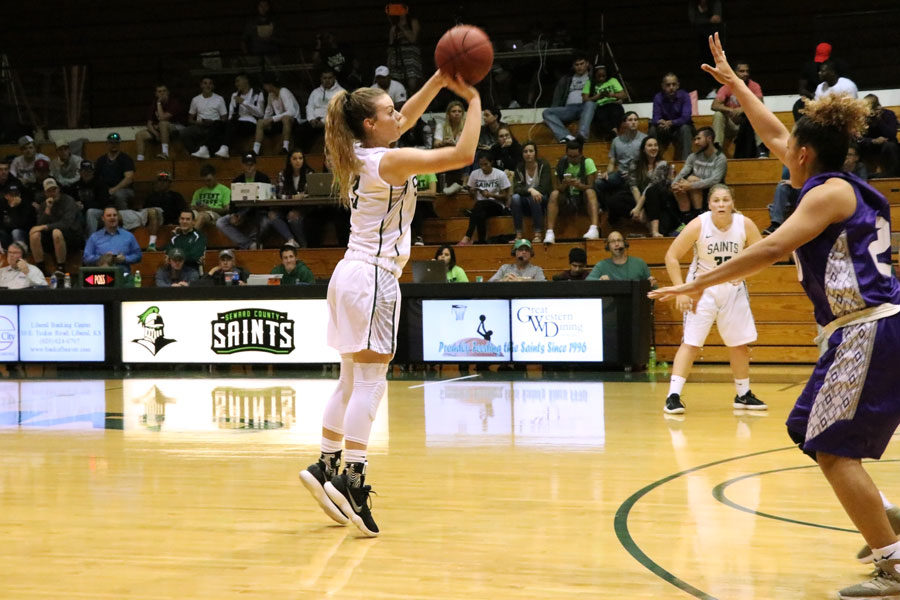 Freshman Amy Scott swishes a three pointer against Butler Community College in the first half.

As the Lady Saints continue their official season, they manage to keep their streak alive by beating Butler Community College in the Greenhouse. The Lady Saints struggled to keep their lead due to unusual errors, such as bad passing and miscommunication, but continued to hustle and take shots, causing them to come out with a win of 72-58.

“I thought that in the first half we played some efficient basketball. We didn’t start the third quarter that well. Then we started making plays and Butler went to zone. Our team should really thrive whenever a team goes zone defense because we’re really good shooters. It was disappointing for us to shoot poorly in the third quarter. Overall, I thought we had chance to separate ourselves, but we let Butler get closer with our lead,” SCCC Women’s Basketball Head Coach, Toby Wynn, said.

In the first half, the Lady Saints came out with some high energy. They didn’t waste any time to make their own lead and keep their momentum going. In the beginning, Butler couldn’t respond with anything that Seward would do. Seward had some very smart plays throughout the first half, which handed them the lead. Unfortunately for Butler, they couldn’t keep up with the Lady Saints’ momentum and struggled to stay close.

The Lady Saints had an acceptable performance against Butler, which makes them start the season with a 2-0 conference overall. The player of the game was Mollie Mounsey, finishing with a total of 21 points, four rebounds, three assists and steals.

The Lady Saints will be on the road as they compete on Saturday, Nov. 18, against Cloud County Community College at 6 p.m.

“Cloud County, it’s a different environment. The gym is set up differently and they play really good at home. They know how to play and it’s definitely going to be tough going against them.” Coach Wynn said.