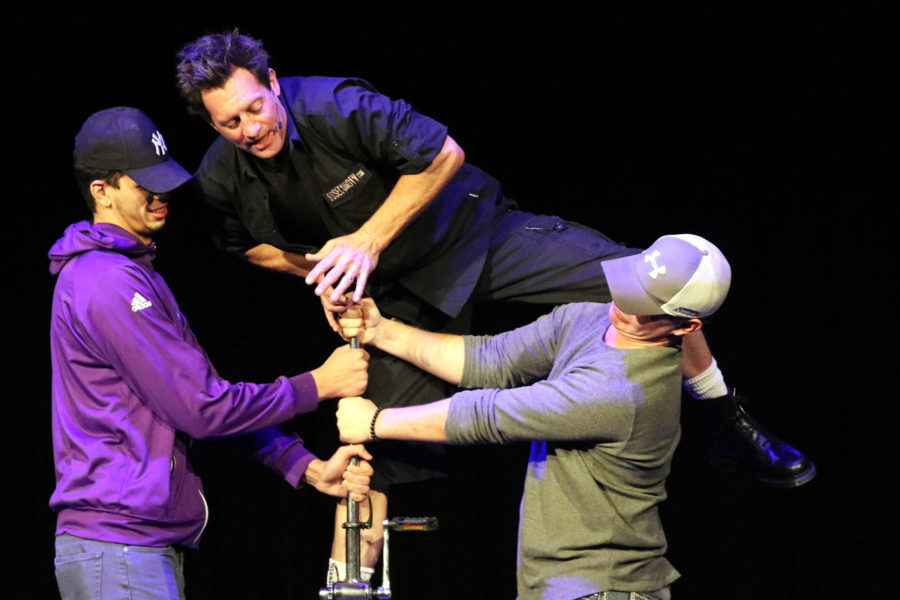 Mad Chad attempts to get on a unicycle with the help of two SCCC students from the crowd. When Chad was balanced on the unicycle, he was given two swords and an apple. He encouraged the audience to shout, “Eat it!” and each time they did, he would take a bite of the apple in the middle of juggling the swords and apple.

As I made my way to the Seward County Community College theater on Thursday evening to watch Mad Chad Taylor’s show, all I could think was “I hope he at least makes me smile.”

Going to a comedy show is always a coin toss. Will they make me laugh until my stomach hurts? Or will I be forced to endure an hour of fake smiling and polite clapping?

Upon entering, I was worried I’d be the only student at SCCC willing to take a chance on Mr. Mad Chad Taylor, but as eight a clock grew closer, a decent crowd began to slowly pour in.

When asked what he was expecting from the show, Moises Alvarado, a freshman general education major said, “I hope we see some comedy and nobody loses a limb at the end of the show.”

When the lights dimmed and the music blasted through the speakers, all eyes were glued to the stage. Mad Chad rode in on a skateboard with a phone in his hand recording SCCC’s reaction to his entrance.

His carefree attitude and Santa Monica, California upbringing shined through. He riled up the crowd and screamed “Who wants to see some danger?” My hand couldn’t have shot up faster.

After juggling, bats, balls, three 10,000 volt stun guns, along with a mix of three different items, including a boot from the crowd, the real danger began to happen. He explained that his last trick consisted of juggling three running chainsaws.

That fact alone kept me glued to my seat. Would he really? Or was it a trick to keep you from leaving in the middle of his show if his jokes ran flat?

SCCC students were laughing when Mad Chad made the occasional dirty joke and hooting and hollering every time he screamed, “Who wants to see some danger?”

Before his big and final juggling act, Mad Chad juggled, bats, balls, shot-puts, and even random things including a boot from the audience.

As the show went on it was finally time for the main event. He started by turning on the first chainsaw and running it through a piece of wood, so the audience members could see that it was real. I scooted out of my chair to get a closer look and thought “Is this even possible?”

He proceeded to do the same with the second and third chainsaw.

Once they were up and running, he threw them up in the air and went for it. He didn’t hesitate. As I sat there watching him juggle three running chainsaws I couldn’t believe how at ease he looked. I thought, “One wrong move and there goes his arm.”

Mad Chad delivered on his promise from the beginning of the show. Danger was indeed what I felt while watching him juggle three running chainsaws. I also laughed … really laughed, throughout the show.