Saints pick up twelfth win of the season 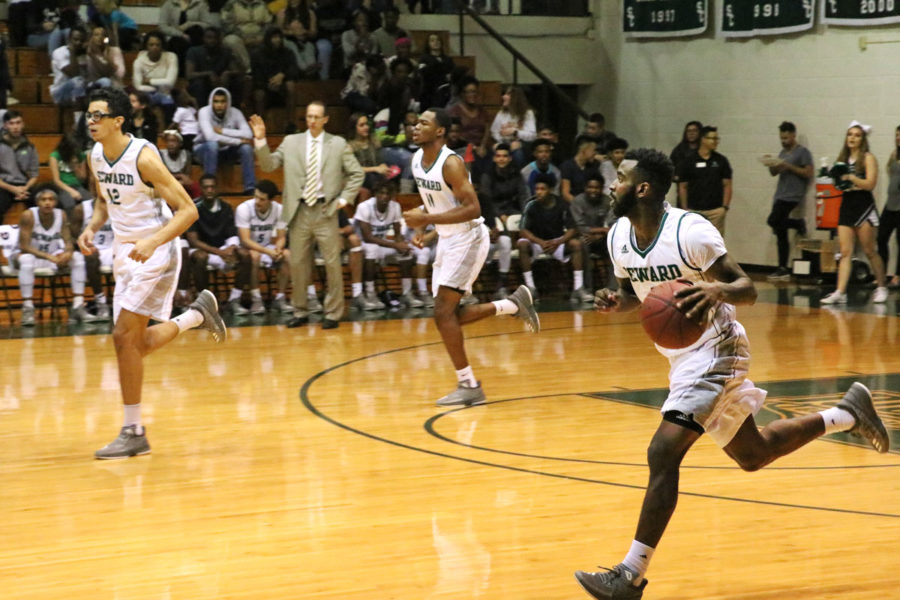 Freshman guard, dribbles down the court during a home game.

The Saints continued their two-game winning streak by beating a team they had previously lost to by six. SCCC defeated Colby Community College on Wednesday, Feb 22 by 15 points.

From the moment of the tip-off, Seward hit the ground running and began a 7-0 run. It was already three minutes into the first half when Colby finally was able to put up a basket. For the rest of the night, every point that Colby scored, Seward went down and did just the same. SCCC shot 50% from the floor and went 4-9 in the first half, ending with a lead of 41-24.

When the second half started, the Saints kept up their momentum and soon extended their lead to a game-high of 22 points. Colby answered by going on a 10-0 run and shortened the lead to 12 points with only 12 minutes left to play.

The game continued with no team scoring until freshman guard, Hegel Augustin, scored  and helped start a 5-0 run by the Saints. This extended the lead back out to 17 points.

This lead was too much for Colby to overcome and Seward took the win, 71-56.

Two saints ended the game in double-figures for the night: Sophomore, Ke’Sean Davis ended the night with 16 points, while freshman forward, Isiah Small earned a double-double with 25 points and 11 rebounds.

The Saints will look to continue their winning-streak and earn a winning record on Saturday, Feb. 24 against Dodge City in the Greenhouse at 8 p.m.