25 shows to binge watch on Netflix! 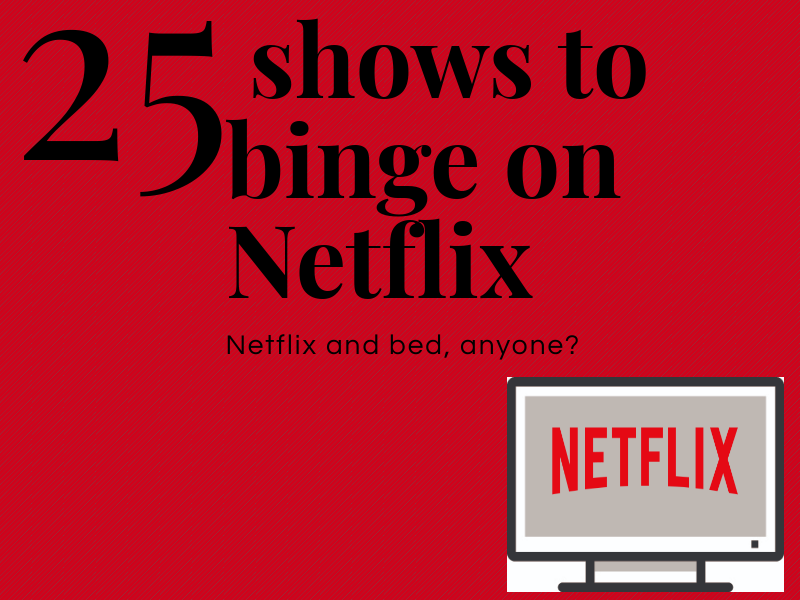 There is no better way to pass the day than by watching Netflix and wrapping yourself in your favorite blanket to watch nine episodes in one sitting, especially if you like to procrastinate. Here are my 25 top shows to watch on Netflix, if you’re looking for something to binge watch during your free time, or you’re just putting off studying for that test tomorrow.
1. Friends

This classic sitcom has a special place in my heart. Who doesn’t know the iconic squad Rachel, Phoebe, Monica, Chandler, Joey, and Ross in their favorite coffee shop.
2. Quantico

Thrown into the world of the FBI and CIA it follows Alex as she tries to save the day and the United States.

We all love fairy tales, right? This show combines them all in a beautiful adventure full of nostalgic memories, but with a modern twist on our favorite fairy tales.
4. DC Legends of Tomorrow

I can admit I am more of a Marvel girl, but this squad of superheroes comes pretty close to second. A bunch of nobodies come together to save the world, there is so much action!
5. Law & Order: SVU

Who doesn’t know the intro? It is a classic crime show that has a lot of seasons and easy to watch episodes.
6. Criminal Minds

Once again Crime TV is on this list. If you love exploring the human mind and serial killers then this show is for you. You’ll catch a crush for any of the characters, mine is Dr. Spencer Reid.
7. American Horror Story

Horror is my genre and this show takes this seriously. A show where every season is a different story yet mysteriously all connected. This is something worth watching.
8. Stranger Things

I did not grow up in the 80’s but the vibes hit me straight on. Creepy weird monster things causing trouble for a group of kids is bound to turn some heads, especially when the government is trying to keep it a secret.

The explanation of this show is all in the title. Follow a family in the bad part of Chicago as Fiona tries to keep her family afloat. Her father is a complete drunk and screw up. (disclaimer: do not watch with children as this show is highly inappropriate)
10. Gossip Girl

Watching a group of rich kids go through their first world problems sure makes you feel better about the fact that at least you don’t have a drug problem and your parents don’t commit fraud.
11. The Walking Dead

Zombies are a must and this show has plenty of them. This show manages to make me plan out my zombie outbreak survival plan.
12. The Magicians

If you like Narnia and if you like Harry Potter then this show is a messed up version for you. I wouldn’t have kids watch them.
13. Supernatural

I have been watching this show since I was eight years old. Follow Sam and Dean as they try to stop the world from ending and fighting Angels and Demons at the same time.
14. How To get Away With Murder

If I told you what it’s about then it would be no fun, but watching lawyers trying to save their own butts sure is fun.
15. The Flash

Based of the comic books. This show truly makes you fall in love with Barry Allen and the Star Labs squad. I am also a big nerd, so I like all the science stuff.
16. Arrow

A rich kid ends up on an island for five years and comes back for redemption and to clean up the city from crime. The Arrow is a good superhero show that keeps you on the edge.
17. Riverdale

This show based of the comics adds some spice to the typical high school drama. Follow Archie and Jughead as they try to uncover their town secrets without trying to get killed.
18. Black Mirror

Technology is everywhere but did you ever think we might go to far? This show shows the bad side of what possibilities we are headed down the road with technology. After the first episode alone made me not touch my phone for the rest of the day.
19. That 70’s Show

Another iconic sitcom that revolves around a group of kids in the 70’s going through life and smoking lots of weed.
20. Penny Dreadful

We all know the dark stories such as Frankenstein and The picture of Dorian Grey. This show combines them all in a gothic setting where every monster comes alive.
21. Jane The Virgin

A girl is waiting to lose her virginity until marriage, but during a mistaken procedure she gets pregnant and catches the eye of a hotel executive. Sure sounds like a novela to me.

I love Marvel and this show is no exception. It takes place in between all the marvel movies and it follows Sky as she goes from criminal hacker to helping S.H.I.E.L.D save the world from aliens
23. New Girl

Dorky girl, Jessica Day moves in with three guys after a break up. She hopes for redemption and finding love. This quirky show will always provide some laughs.
24. Chewing Gum

This British TV show follows a 24 year old who lives in a strictly religious home and has no sex education whatsoever. Her main goal is to lose her virginity. The adventure is hilarious.
25. The Office

Watching a bunch of office people do crazy things with their crazy boss is sure to keep you entertained. There is also many “that’s what she said” jokes.

Whether you like crime tv or just plain sitcoms there is something out there for everyone, especially when you’re trying to watch something good. Netflix like Hulu and Amazon Prime have a variety of content to watch and for some reason I have made it my mission to watch it all.