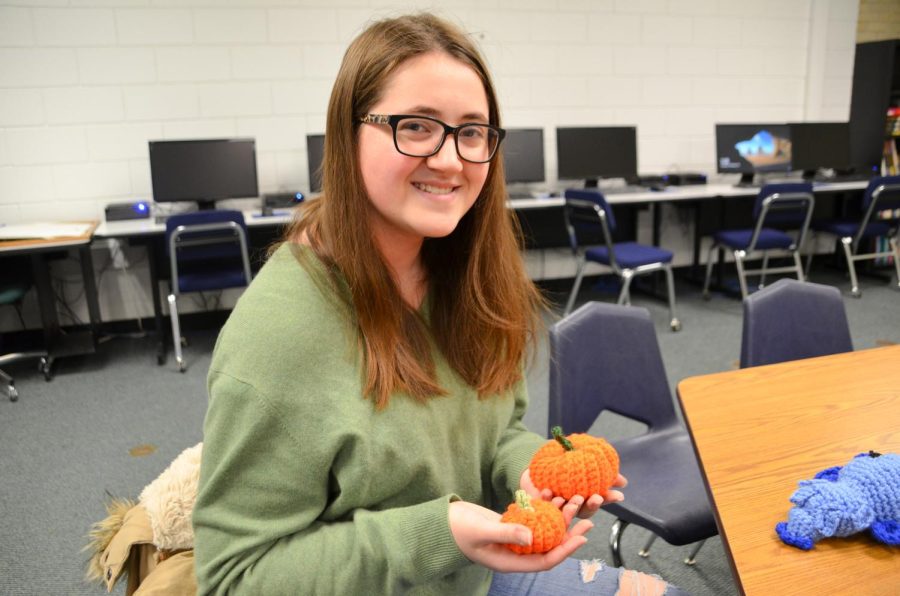 Art Education major, Nicole Piper is from Hugoton. Piper learned to crochet when she was 12 years old and she has been crocheting for six years now.

Crochet is the next fidget spinner

Ever since COVID and quarantine hit the world, students have been coming up with interesting hobbies and activities to pass the time. Nicole Piper, an art education major from Hugoton,  has been doing her hobby for the last six years.

Piper likes to create blankets, animals and vegetables out of yarn using a technique called crochet. The person who first taught Piper how to crochet was her niece Xana. Piper said Xana used to crochete a lot around her. Her 12-year-old self begged Xana to teach her and she immediately loved it.

Piper started off with baby blankets but this past year she began making small stuffed animals and pumpkins. She really enjoys making the stuffed animals because they only take two or three hours while some of the blankets she’s made have taken a year or even more.

The main reason these bigger projects take so long for her to make is because of a lack of motivation. Piper said finding the motivation to finish a project is probably the hardest part about crocheting.

“I am always so eager to start one but actually finishing it is the hardest part. Yarn prices have also gone up this past year so trying to afford enough for a blanket can be hard as well,” said Piper.

One of the baby blankets that took a couple of years to make actually shows the progress of her crocheting skills. Piper described that the middle looked like a toddler had made it but the outside looked gorgeous.

“Yeah, you can see my progression over the last couple of years. I kept walking away from it and coming back saying I would finish but then I’d walk away again,” Piper explained with a chuckle.

Her blankets, as well some of the other items she crotchets, she gives away to friends and family as gifts.

William Swanson, her friend, spoke about how Piper taught a crochet class back in October at Baker Arts Center. Even though he ended up being the only student, he said it was a lot of fun to learn how to make a crochet pumpkin.

“Difficult at first, but fun once I got the hang of it,” said Swanson.

Pumpkins are Piper’s favorite thing to make. She started making them for work but loved them so much that she had to keep a few for herself. Now Piper uses them to throw at her roommate.

Using them to throw at her roommate isn’t the only reason why Piper crochets. She explained that she is a nervous fidgeter. She always has to do something with her hands and crocheting has now become her fidget thing.

“I started crocheting in class and it helped me pay attention better. It kept my hands busy so I used that nervous energy to create something. It was a whole lot better for me than just fiddling with a pen,” said Piper.

Sherry Moentmann, her English instructor, spoke about the one time Piper was crocheting in her class. She explained that she saw Piper’s eyes were to her, paying attention, and wasn’t causing a distraction so she let her be.

“There are people that in order to think and process they need something in their hands. It depends on the student. If it’s not a distraction, it’s okay,” said Moentmann.

All in all, Piper said crocheting makes her calm and happy. It’s a hobby where she can just sit there in a zen feeling and create.