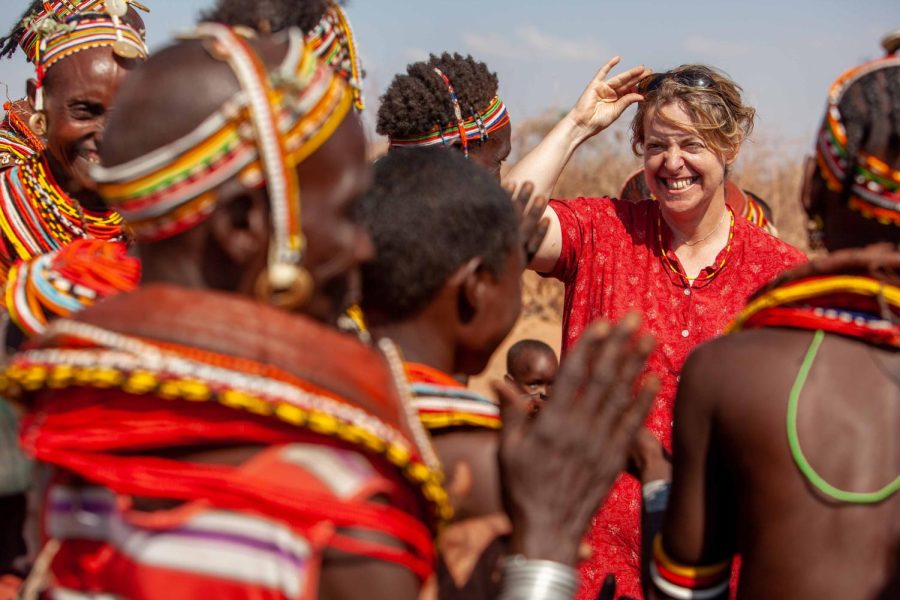 Sue Sprenkle, the mass communications instructor, transitioned from a full-time instructor to an adjunct professor for Seward County Community College this current semester. With previously 20 years of experience being a traveling journalist, Sprenkle has covered stories from major national disasters, political unrest and Olympic competitions.

Strolling down the street, Sue Sprenkle wasn’t prepared for the blackness that quickly overtook her as rough material covered her head. Kidnappers chucked her into the back of a van with a thud driving around until she became confused and disoriented. Don’t worry. This was all part of the training to become a missionary.

Sprenkle, the mass communications instructor, transitioned from a full-time instructor to adjunct for Seward County Community College this semester. Sprenkle officially left the college in May to return to the International Mission Board organization that she was a part of for about 20 years before coming to the college.

With 20 years of being a traveling journalist, Sprenkle covered stories from major national disasters, political unrest and Olympic competitions. Her stories are known by many faculty on campus. One of Sprenkle’s friends, Kelly Jo Brown, said her favorite story was of a lady with leprosy.

“When I was a reporter, I often covered the blood and guts beat. With the mission, many times I was the person to respond first with natural disasters or war. I’d go in, assess the situation and write a few quick stories. After that, we would decide what kind of team should come in and to continue the coverage,” Sprenkle explained.

The leprosy story took place after one of these kinds of disasters — an earthquake in Nepal. When she got to the scene, someone suggested she interview a woman in their building. When Sprenkle first went up to talk to her, she didn’t know the woman had leprosy. When she got closer though, it could be seen that the lady had nubs for fingers and feet.

Since her husband had to carry her places, the woman spent hours every day praying for the world and her country. On the day of the earthquake, the woman had woken up from her nap, saying that she needed to pray. As she prayed, the building began to quake and a noise that sounded like a train began.

During her interview, the woman also talks about the different verses she read before the earthquake came. They talked about the earth’s trembles and such. She had been praying about these things when the earthquake happened.

Two of Sprenkle’s favorite stories were those she wrote with interesting leads. She started one story by describing the sound of hairdryers, hair products and the delicacy of getting the perfect hair to swoop off the forehead. Surprisingly to the reader, the story was actually about a cow show.

“It was my favorite because people didn’t know until they got to the third paragraph… what the story was about. It was just a creative way,” Sprenkle explained with a laugh.

She did something similar to this in another one of the stories she wrote in college. The article had been about a farmer who raised snails for escargot and restaurants in his garage. She had slowly drawn the reader in by describing the farmer, how he put his hat on and looked over his shoulder at his herds… that was in his hand.

In the more than 100 different countries she has visited, her favorite place would have to be Kenya because she lived there for many years. When the world was watching Kenya’s riots after the 2008 election, Sprenkle was covering it from the day the results became public.

“When they announced the results on the way home from church, everybody turned against everybody,” Sprenkle said, explaining the start of the riots.

A story Sprenkle wrote during this time is still one of her favorite articles today. It started with her walking through the slums of Kenya, past riots and through tear gas to witness a group of kids praying for their area.

“Children gathered to pray because they wanted to protect their area of the slum. They got together on their own, and they pounded on the door until the pastor let them in,” Sprenkle said.

This led to a group of kids — ages 2 to 18 — praying every single day for two hours on their knees. Throughout the conflict that rampaged in Kenya, the childrens’ slum was left untouched and nobody in their area died.

“I had to go through a bunch of fighting, a bunch of tear gas and everything like that just to get to them. Then, it was very peaceful and it was fun to see kids, you know, taking responsibility and doing something like that,” Sprenkle said.

The stories of her travels have stunned some of her colleagues Magda Silva, choir instructor, still remembers her first real conversation with Sprenkle. During a yearly division meeting, Silva sat by Sprenkle and made a “snarky comment.”

“I guess I must have said something about being kidnapped or something. She turned around… and she went, ‘Well the first time I was kidnapped,’ and I was like ‘There are many things wrong with that statement. Were you serious when you said you got kidnapped?’ She just went ‘Oh yeah,’ like everyone has that happen,” Silva said.

Sprenkle went on to explain how a part of her missionary training, while she was in the United States, was to be randomly kidnapped. She would just be walking down the street when a van would show up and bag her head. This was a pretty shocking concept to Silva that this training could happen here in America.